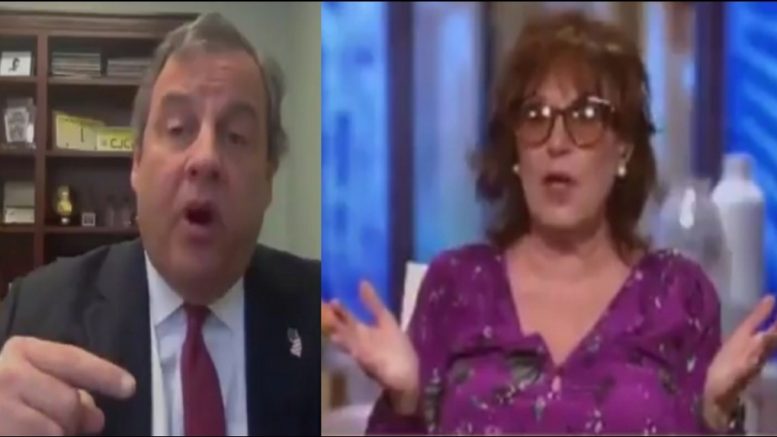 Former New Jersey Governor Chris Christie leveled Joy Behar on Friday while sparring with her over the COVID-19 crisis on The View.

The drama unfolded after Behar claimed that Republicans would rather fund things like military instead of “helping” those in need during the crisis.

Governor Christie knocked down Behar’s initial assessment and mentioned the stimulus packages that Republicans overwhelmingly voted in favor of, amd has helped millions of Americans.

Behar then asked, “Why is everybody upset — running out to the streets and defying the rule? Why?”

Related Article: Joy Behar Claims Biden Would Beat Trump Even If He Was “Locked In A Trunk In A Basement In The Middle Of The Canary Islands”

Christie fired back, “That’s just wrong. That’s absolutely wrong. It’s your point of view, and you’re welcome to it, but you’re not welcome to your own set of facts.”

Chris Christie to Joy Behar: "That's just wrong. That’s absolutely wrong. It’s your point of view, and you’re welcome to it, but you're not welcome to your own set of facts." pic.twitter.com/0TbuoUjQWV

Gorka Issues A Reality Check: Trump “Is A Force Of Nature Comparing To A Dude Who Goes To Bed At 7 PM”