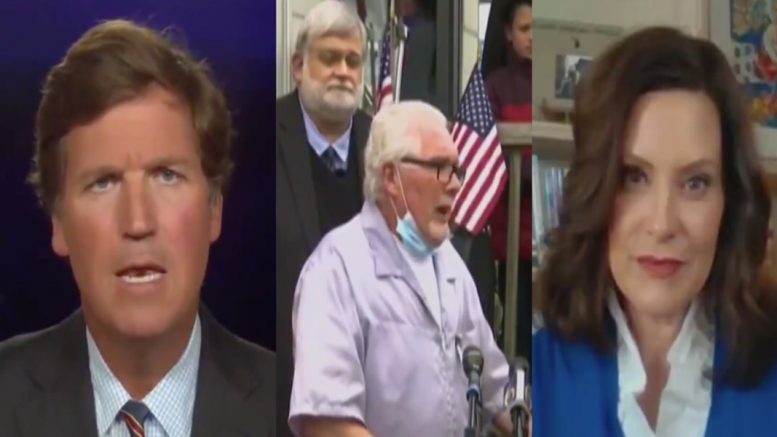 Gov. Whitmer has extended until May 28 her stay-at-home order which restricts people to their homes except for crucial errands, taking part in safe outdoor activities or going to specific jobs. However from May 29, groups of up to 10 people may be allowed, Click on Detroit reported.

“Nobody in America is enjoying all of this more than Michigan governor Gretchen Whitmer,” Carlson said. “It’s always the most mediocre people who love fascism the most. It gives them power they never dreamed they would have and indeed don’t deserve. Whitmer wants this moment to last forever.”

“She’s enraged that anyone would dare to complain about it,” Carlson said. “She went on ABC yesterday and dismissed any citizen who disagrees with her, needless to say as a ‘racist’. And then she promised disobedient citizens in Michigan, will be punished with even more severe lockdowns.

He proceeded to play a clip of an interview with Whitmer on ABC’s “The View”, in which she criticized the recent protests in her state, calling the protestors who want the state to be reopened as “racist and misogynistic”.

Carlson sarcastically continued: “Yeah. Not only is it racist, it’s dangerous to the public health, and racist.” Continued Below

The Fox News host pointed out that Whitmer was asked if she had “evidence [or] proof” in that the protesters were actually spreading the virus. “You’d be surprised to learn, she didn’t. And by the way, that question is misogynistic, so shut up, bigot,” he said, mocking the left.

“Some people in Michigan are finally growing tired of this performance,” he said, noting the case of Karl Manke, who is a 77-year-old barbershop owner from Owosso. “He would like to continue cutting hair, authorities won’t let him do that. They prefer to send him welfare checks instead. That is not the country he wants to live in though,” Carlson added.

Manke defied the governor’s coronavirus shutdown order and opened up his shop anyway. He had said of her orders: “the government is not my mother”. The state ultimately suspended his license for defying Whitmer’s lockdown orders. Continued Below

Carlson noted Whitmer was “not amused” by Manke’s defiance, adding: “Government is not mom? Misogyny. By the way, cutting hair is racist. So Whitmer’s administration tried to shut Manke down with a court order, [be]cause there is nothing else going on in Michigan right now. A judge resisted that– it was too far.”

“So, Whitmer’s lackeys simply revoked Manke’s barber’s license. Now he’s shut down for good,” Carson explained. “And even when the lockdowns end. That will show him. Stop whining and take your welfare check, bigot! This is insanity, obviously, and at some point, we are going to look back in shame as we consider it.”

“Politicians will always seize the maximum amount of power they can. That’s why they went into politics in the first place, to fill that empty space inside. The question is for the rest of us: ‘Why are the rest of us allowing this to happen?'” he wondered. Video Below

Tyrant @GovWhitmer revoked an Elderly Barber's license for opening up in defiance of her orders after he said "the Government is not my mother".

She does not belong in power. pic.twitter.com/MC2m7bZ5Vp

Michiganders who want to be able to work so they can feed themselves and their families, remember what @GovWhitmer thinks of you: