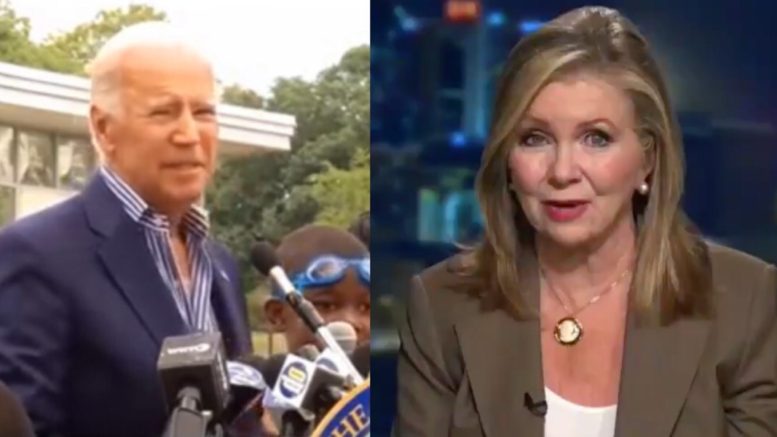 Senator Marsh Blackburn (R-TN) believes that former Vice President Joe Biden “should step forward and say ‘There should be no double standard when it comes to dealing with women’, amid sexual assault allegations leveled by Tara Reade, who said she was a staff assistant for Biden in 1993 when he was in the Senate.

“You know Shannon, as I talk to women about this, they are saying, ‘Hey, wait a minute! Where is fairness in this? Brett Kavanaugh was treated one way. The media was all over Brett Kavanaugh– they turned it into a kangaroo court with the help of the Democrats on the Judiciary Committee. And now, there is nothing being said about Tara Reade,'” the Tennessee Senator said.

“The interesting thing to a lot of women about this is that Tara Reade can say, ‘This is who I talk to’, there is the recording of her mother calling in to Larry King, there are others that say ‘Yes, she told us about this’. So she has that corroborating evidence that is necessary that Christine Blasey Ford never had. She couldn’t tell you date, time, place, year. Tara Reade can give you the specifics and the details,” the Tennesee Senator explained.

She added: “You know the Democrats have a tendency to say, ‘We are going to abide by rules when it helps us to achieve our goal, but we are going to get rid of all of those rules if they stand in our way, of reaching our goal’. They hate President Donald Trump.” Video Below

"Democrats have a tendency to say, we are going to abide by rules when it helps us to achieve our goal, but we are going to get rid of all of those rules if they stand in our way, of reaching our goal." – Sen. @MarshaBlackburn pic.twitter.com/sxAP68P2qF

Friday during an interview on MSNBC’s “Morning Joe”, and in a written statement, former Vice President Joe Biden, for the first time, issued a public denial over a sexual assault allegation leveled against him by his former Senate staffer Tara Reade.

Though, he defended keeping documents at the University of Delaware sealed, claiming the information “could be really taken out of context.”

The New York Times on Saturday called for the Democratic National Committee to investigate the sexual assault claims against the presumptive Democratic nominee.

“As is so often the case in such situations, it is all but impossible to be certain of the truth. But the stakes are too high to let the matter fester — or leave it to be investigated by and adjudicated in the media. Mr. Biden is seeking the nation’s highest office,” a column by the Times’ Editorial Board said. Continued Below

“Last year, this board advocated strongly for a vigorous inquiry into accusations of sexual misconduct raised against Brett Kavanaugh when he was nominated to a seat on the Supreme Court. Mr. Biden’s pursuit of the presidency requires no less,” the board said. “His campaign, and his party, have a duty to assure the public that the accusations are being taken seriously. The Democratic National Committee should move to investigate the matter swiftly and thoroughly, with the full cooperation of the Biden campaign.”

The Times argued that for the probe to be a “serious inquiry,” it must include a search through the records in the University of Delaware: “No relevant memo should be left unexamined.”

“Any inventory should be strictly limited to information about Ms. Reade and conducted by an unbiased, apolitical panel, put together by the D.N.C. and chosen to foster as much trust in its findings as possible,” the board said.

The hypocrisy on the left is astounding. pic.twitter.com/KrN39nX2rm

(Related: Trump Campaign Issues A Statement On Biden’s Response To Sexual Assault Allegations Against Him)

Vernon Jones On Fulton County Hiring Two High Profile Criminal Defense Lawyers: “There Is A Dead Cat On The End Of This Line & It’s Stinking”