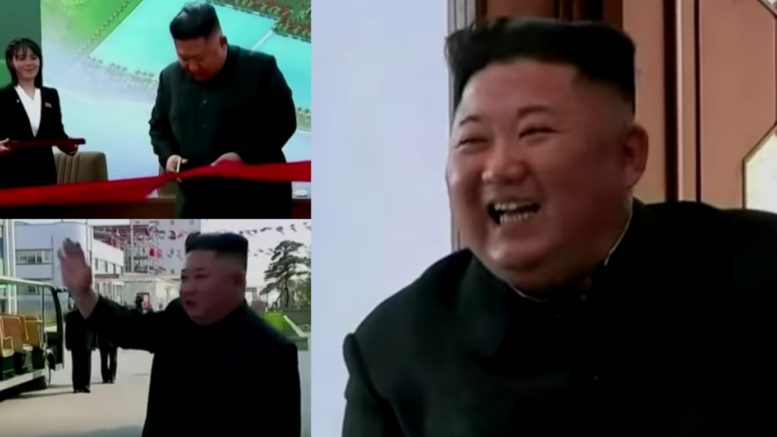 On Friday, reports began circulating that Kim attended a ribbon-cutting ceremony to mark the completion of a fertilizer factory. Photos surfaced soon after, showing Kim cutting a red ribbon with his sister and other leaders surrounding him.

Some sources, including CNN, casted doubt that the images being circulated were actual proof that Kim was alive and well. However, The Sun uploaded a video on Saturday that corroborated reports.

The video, which can be seen below, shows Kim strolling around the area around the factory and cutting a ribbon, as North Koreans cheer in celebration.

Kim is then seen getting into a transport vehicle and speaking with leaders as he tours the new facility — at one point smiling, laughing and smoking a cigarette. He appears to be in very good shape, conflicting reports that say otherwise.

The public appearance by Kim is his first since April 12, according to The Sun.

After skipping a celebration in memory of his grandfather, it was reported by global news outlets that the North Korean leader may have suffered a heart attack, and was either dead or in a vegetative state. The new video, nevertheless, proves otherwise.

CBS WH Reporter: ‘I Felt Safer Reporting In North Korea’ Than I Do At The WH, Instantly Gets Blasted