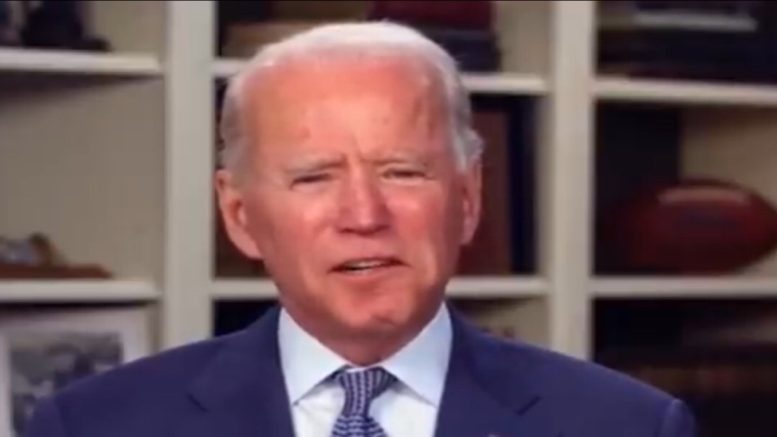 “Yes, I will. But I will also insist that we do what we were doing before. We set up a pandemic office in the White House, President Obama. We had CDC, the folks for Centers of Disease Control stationed in other countries to anticipate when we might see a virus coming, a pandemic coming,  because there’s going to be more of these,” Biden said.

“I would be much more engaged in the world. We can’t step back. If, in fact, for example, we solve the problem in the United States of America and you don’t solve it in other parts of the world, you know what’s going to happen,” he continued.

“You’re going to have travel bans, you’re going to not be able to do, have economic intercourse around the world,” Biden complained.

“Look, when America goes alone– when America is first, it’s America alone,” he announced, appearing to suggest he will not put America first if he was elected president. Video Below

.@JoeBiden: What we need is more “economic intercourse” pic.twitter.com/zLa8hqspC0

Biden was also asked about his son Hunter Biden’s business dealings in China, but deflected to attack President Trump and repeated a debunked claim.

Jim DeFede asked, “China is likely to become a major issue in this election, in part because of the coronavirus. I think you’ve been critical of the way the administration’s handled China. The administration has been critical of the way when you were vice president when you were dealing with China. I guess I want to ask you, do you think this is in fact going to be a major issue, and are you vulnerable at all because of your son’s business dealings in China?”

“No, I don’t believe so at all,” Biden responded. “My son’s business dealings were not any– what everybody– that he’s talking about, not even remotely, number one. Nothing to do with me, number two. And talk about business dealings, look at the business dealings the president has with China. You know, apparently, he owes millions of dollars to the bank of China. He’s got patents.”

Biden likely was referring to a report written by Politico last week, in which the news source later had to issue a correction. “This article and headline were updated in light of new information”, adding “editor’s note and a correction at the bottom of the story,” Politico wrote.

“Correction: An earlier version of this article reported that President Trump owes tens of millions to the Bank of China stemming from a 2012 real estate deal. Though Bank of China helped finance the deal, it later sold its interest in the loan,” Politico wrote at the bottom of the article, correcting their story. Video Below

Joe Biden on his son’s business dealings in China:

(Related: Parscale Trolls Biden’s Past Call To Hear From Those Who ‘Stepped Up’ Against Sexual Assault: “I Nominate Tara Reade”)