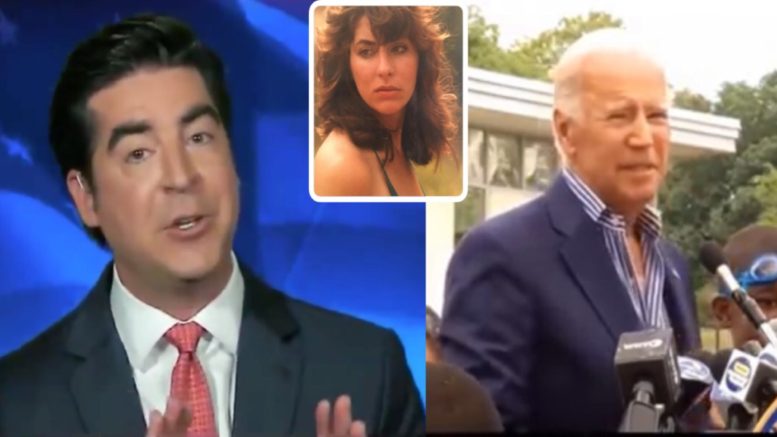 Tuesday during Fox News’ “The Five”, co-host Jesse Watters suggested what Joe Biden should do if we are to follow the standards that Democrats set forth before Justice Brett Kavanaugh was nominated to the Supreme Court.

“Joe does not have a firm grasp on this nomination. It’s a grasp. I wouldn’t call it firm,” Watters said. “I mean, remember what happened with Al Frankin? They dumped that guy over so fast because they thought it created vulnerability with the Roy Moore situation, and I don’t see that happening here.”

“This guy is not invincible,” Jesse Watters insisted. “And to think that Hillary batted an eyelash endorsing Biden under a cloud of sexual assault. One, she’s done it before. And two, I don’t believe Hillary even knows– the MSM hasn’t even covered this. They’ve covered it here and there. I mean, what has it been in the New York Times once or twice? It’s been in CNN.com once.”

“And every time it appears in the mainstream media it’s either to poke holes through [Tara] Reade’s story or to characterize the story as Republicans pounce on allegations about Joe,” Watters pointed out.

“If you were to use their standard on them, you know, this would be very troubling. This is a concerning pattern with Joe. The mere allegation may make him have to withdraw,” he informed.

"Joe Biden, why don't you agree to an FBI Investigation because if not you are obviously guilty!" On what Biden should do if we are following standards democrats set for Kavanaugh. #TheFive pic.twitter.com/WXKpC0BMPS

Before his confirmation, President Trump in September 2018, ordered the FBI to conduct a limited “supplemental” background investigation into the allegations of sexual assault against Supreme Court nominee Brett Kavanaugh.

Kavanaugh, who had denied all the allegations, said in a statement he will “cooperate.”

“Throughout this process, I’ve been interviewed by the FBI, I’ve done a number of ‘background’ calls directly with the Senate, and yesterday, I answered questions under oath about every topic the senators and their counsel asked me,” Kavanaugh had said in a statement. “I’ve done everything they have requested and will continue to cooperate.” Continued Below

President Trump tweeted that “tonight” the “7th FBI investigation of Judge Brett Kavanaugh” had begun, adding: “He will someday be recognized as a truly great Justice of The United States Supreme Court!”

Joe Biden, at the time, said in a statement that Doctor Blasey Ford “deserves an FBI investigation” and he is “glad that members of the Senate have exercised their power to advise and consent to delay further action on this nomination for a short while longer so that the FBI can do its due diligence in this nomination.”

However, he condemned Republicans on the Senate Judiciary Committee, saying that he “witnessed” among them “a degree of invective, blind rage, and brute partisanship that threatens not only the Senate and the Supreme Court — it threatens the basic faith in fairness and justice that binds this country together.”

(Related: Alyssa Milano Breaks Her Silence On The Latest Tara Reade Developments: “I Hear And See You, Tara”)