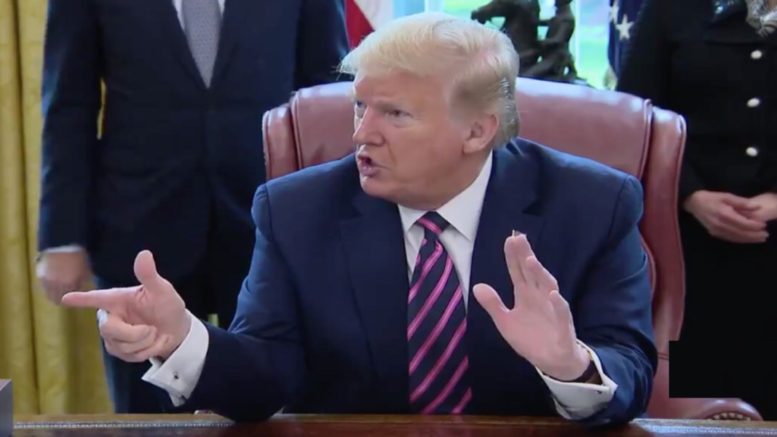 During Thursday’s Coronavirus Task Force briefing, Bill Bryan, the head of the science and technology directorate at the Department of Homeland Security, presented the findings of the federal government’s study on sunlight, humidity and temperature’s effect on the coronavirus — as well as various disinfectants on the virus when it is on surfaces.

The president reacted to Bryan’s comments, suggesting that light and disinfectants may have the potential to treat COVID-19. However, the media and Democratic lawmakers took the president’s remarks “out of context”, according to White House press secretary Kayleigh McEnany.

While taking a few questions from reporters Friday at an Oval Office bill signing, the president said he was being sarcastic when he suggested that scientists should consider exposing the body to disinfectants as a potential treatment for the coronavirus.

“I was asking a question sarcastically to reporters like you just to see what would happen,” President Trump told reporters.

A reporter pointed out that the president had turned to experts next to the podium when he first raised the idea on Thursday, the president claimed he was asking those officials “whether or not sun and disinfectant on the hands … can help us.” Continued Below

Related: Trump Stumps Reporter As She Grills Him Over His Initial Response To The Crisis: “How Many Cases Were In The U.S. [When] I Did A Ban?”)

President Trump reacted: “No, of course not. Interior wise, it was said sarcastically. It was put in the form of a question to a group of extraordinary hostile people. Namely, the fake news media.” Video Below

Q: "Can you clarify your comments about injections of disinfectants?"

President Trump: "I was asking a question sarcastically to reporters like you just to see what would happen."

President Trump: "No. Of course not…It was said sarcastically. It was put in the form of a question to a group of extraordinary hostile people. Namely, the fake news media." pic.twitter.com/pmwr1YqPzg

Interesting information about how increased temperature, humidity, and solar light are detrimental to Coronavirus in saliva droplets. pic.twitter.com/pSH43LT3gn