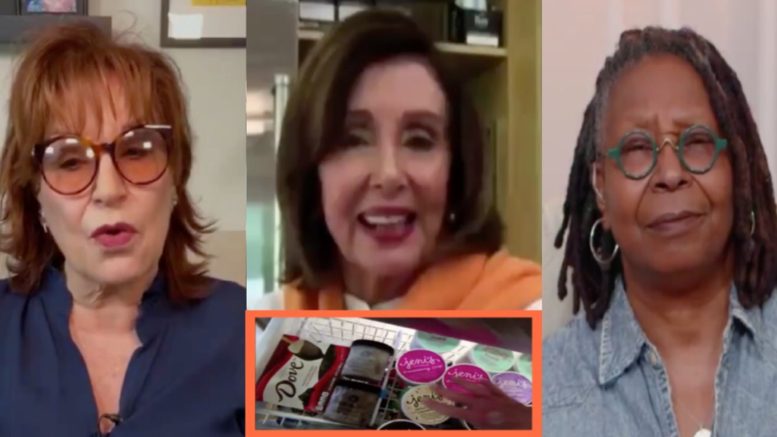 A new video ad unleashed by the Trump 2020 campaign was tweeted by campaign manager Brad Parscale on Monday, amid the coronavirus crisis.

The damning video ad takes aim at House Speaker Nancy Pelosi (D-CA) as the Paycheck Protection Program hit its $350 billion limit last week, and is no longer accepting any more lenders or applications.

Whoopi Goldberg, during Tuesday’s airing of ABC’s “The View”, defended Pelosi for stalling small business funding, along with protecting the Speaker’s appearance on “The Late, Late Show With James Corden” last week, after Pelosi was seen in her kitchen showing off her chocolate candy and $12 pints of ice cream in front of expensive refrigerators.

Goldberg aired part of the Trump campaign ad with Pelosi as she is heard bragging after she turned down Republicans’ requests to give small businesses more money. “I don’t think so,” she said.

“They objected, and I congratulate the Senate Democrats,” Pelosi had said during an interview with MSNBC’s Chris Hayes last week, which was played in the ad.

Goldberg went on the defense saying: “So I want to point out that the ice cream she’s talking about actually comes from a small business. I know that because I send this ice cream out to people, and she is one of the people that is fighting to make sure that small businesses are able to get the testing they need and the stuff that they need.” Continued Below

Goldberg turned to Behar, asking: “So Joy, you kind of feel like she’s being scapegoated here?”

“Of course. But I love that you just said that that’s a small business. That’s perfect,” Behar said, defending Pelosi with her cohost Goldberg. “You know, the Democrats are, in fact, fighting for more funding for hospitals as well as relief for small businesses for minorities and veterans, okay? That’s what the Democrats are fighting for, so this is just another distraction.”

“Okay, it doesn’t look good maybe. I mean, she’s got an expensive refrigerator,” she continued, then turned the subject to attack President Trump. Continued Below

Cohost Meghan McCain said that the ad was a “kill shot”, adding: “I think it’s not the ice cream that’s in her fridge, it’s the fact that she’s standing behind a giant refrigerator, multiple ones that cost $24,000 each. … I think in this specific moment, optics are narratives. … What she’s saying in the video, … tread very carefully with the comedy shows. This is not the time or moment to be doing something like this.”

“Seeing a 24,000 refrigerator and joking about holding up money for small businesses at the same time, they’re showing videos of people saying they’re starving, and showing videos of their fridges that are empty–it is very effective. … Democrats need to be very careful how they are treating and talking about people that are jobless and unemployed and going hungry in this country,” she added. Video Below

Americans are losing their jobs since the virus rocked the economy.

Nancy Pelosi blocks funding for people to keep getting paychecks.

Terrence Williams Blasts Joy Behar As Photo Re-Surfaces From Her Past: ‘Joy Blackface!’