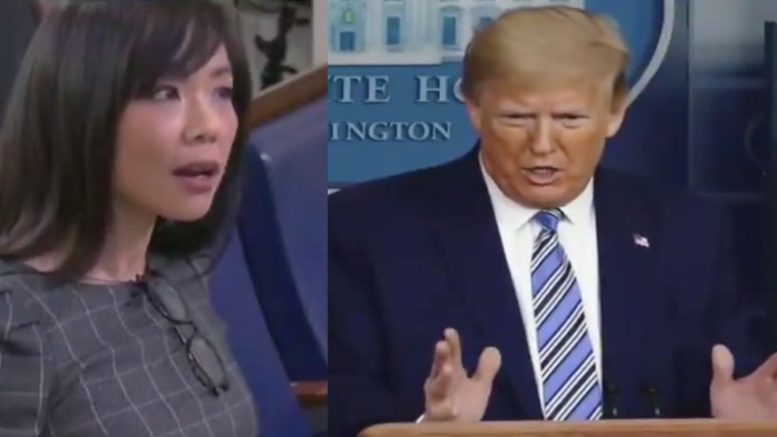 Sunday during the White House Coronavirus Task Force, President Donald Trump told CBS White House correspondent, Weijia Jiang, that she should say “thank you very much for good judgment”, for his initial response when he shut down travel with China in January amid the novel coronavirus.

“Since you shared with us something else that you saw on TV today, I have a question about something you said on Thursday– that you were angry because information about the virus should have been told to us earlier and a lot sooner. People knew it was happening and people did not want to talk about it,” Jiang said to the president.

“Many Americans are saying the exact same thing about you– that you should have warned them that the virus was spreading like wildfire through the month of February, instead of holding rallies with thousands of people. Why did you wait so long to warn them? And why did not have social distancing until March 16?” Jiang asked the president.

President Trump replied: “Who are you with?” to which she responded: “I’m Weijia Jiang with CBS News.”

“So, if you look at what I did, in terms of cutting off or banning China from coming in…” the president began to say, but Jiang interrupted to point out: “Chinese nationals, but by the way, not Americans who were coming from China.”

“Nice and easy, nice and easy, just relax,” President told the CBS correspondent. “We cut it off. People were amazed. … Everybody was amazed that I did it. We had 21 people in a room and everyone was against it but me. Dr. Fauci said had I not done that, perhaps tens of thousands, and maybe much more than that, people would have died.” Continued Below

“I was very early, very, very early. And we just saw Bret Bair making a statement– they had a debate, well into February. And not even mentioned– it wasn’t even mentioned by Democrats. We were very early,” the president said, referring to the Fox News host.

Weijia Jiang interjected again to say: “And by the way, when you issued the ban, the virus was already here.” Continued Below

The CBS corresponded tried to deflect, which prompted the president to say, “No, no, no you have to do your research.”

“I did my research,” she insisted. “On the 23rd of March, you said you knew this was going to be a pandemic.”

“And you should say thank you very much for good judgment,” he told the CBS correspondent.

President Trump asks @CBSNews reporter how many cases and deaths there were in the U.S. when he restricted travel with China.

She did not know the answer. pic.twitter.com/OLSGTBu8NH

Last month, Weijia Jiang, claimed on Twitter without giving a name: “This morning a White House official referred to #Coronavirus as the ‘Kung-Flu’ to my face. Makes me wonder what they’re calling it behind my back.”

Counselor to the president, Kellyanne Conway, responded to the claim that an alleged White House Official called the coronavirus “Kung Flu”, and told reporters, “Tell us who it was.”

Weijia Jiang refused to name who the staffer was when Conway kept pressing for an answer.

Kellyanne Conway to reporters on alleged White House staffers calling Coronavirus "Kung Flu virus": "You should tell it all who it is. I'd like to know who it is." pic.twitter.com/ZCJu5UtfaE