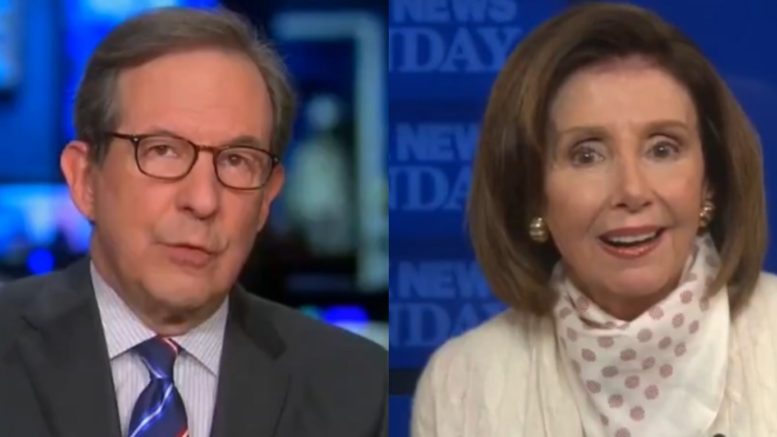 While interviewing with Chris Wallace on Sunday, House Speaker Nancy Pelosi got called out for promoting tourism to Chinatown at the end of February, when the coronavirus was already infecting Americans across the country.

In a video that was taken in Chinatown on February 24, Pelosi is heard saying, “Everything is fine here. Come because precautions have been taken…We think it’s very safe to be in Chinatown and hope that others will come.”

Throughout the interview, Pelosi was highly critical of the President’s handling of the crisis, which led to Wallace to turn the tables and bring her remarks front and center.

After playing the clip of Pelosi promoting tourism in Chinatown, Wallace asked, “If the president underplayed the threat in the early days, Speaker Pelosi, didn’t you as well?”

“No!” Pelosi responded. “What we’re trying to do is to end the discrimination — the stigma that was going out against the Asian American community. And in fact, if you will look, the record will show that our Chinatown has been a model of containing and preventing the virus.”

She continied, “So I’m [confident] in our folks their and thought it was necessary to offset some of the things that our president and others were saying about Asian Americans and making them a target — a target of violence across the country.” Video Below

Wallace interrupted and asked, “Don’t you think when you’re out walking without any mask — I understand this is February, not April when this happened — and saying that there’s no threat, it’s perfectly safe there, weren’t you also adding to this perception that there wasn’t such a threat generally?”

“No, I was saying that you shouldn’t discriminate against Chinese Americans, as some in our Administration were doing by the way they were labeling the flu and that, no indeed,” Pelosi replied. “I think if yoh check the record as current, you will see that Chinatown has been a model in all of this. Look to them for answers. Don’t look to them to place blame.” Video Below

Scarborough Urges Oregon Leaders To Call In The National Guard, James Woods Responds: “The #SleepyJoe Mob Is Waking Up”