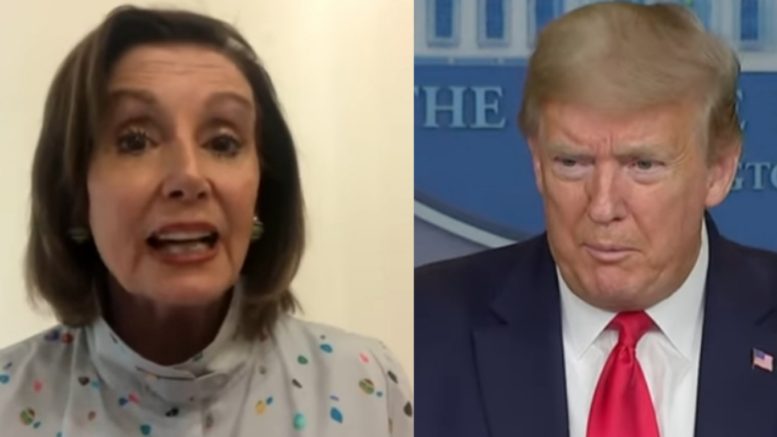 House Speaker Nancy Pelosi claimed on Friday that the COVID-19 “situation” that America is currently faced with is a direct result of President Trump’s “making”.

Pelosi made the suggestion while interviewing with MSNBC’s Ari Melber, where she gave her opiniom of how Congress reacted to the virus versus the way Trump handled it in the early phases.

“The second bill was mask, mask, mask and trying to facilitate the personal protective equipment that we don’t really have as much as we needed when we needed it because the President wouldn’t do Defense Production Act,” she added.

So, the situation we are in is largely of [President Trump’s] making,” Pelosi declared. “Calling it a hoax, saying it’ll magically disappear, not calling upon the Defense Production Act to protect the workers who are trying to save lives as they risk their own lives in doing so.” Video Below

Pelosi also claimed that the current economic downturn is probably the result of a “combination of both” the pandemic and a “Trump recession”.

Part of the problem with what Speaker Pelosi suggested in her interview is that President Trump never directly called the coronavirus outbreak a hoax and it has already been debunked by Snopes, as pointed out in the following post:

Even Snopes, a leftist leaning fact checker says that Trump did not say that the coronavirus was a hoax. The Democrats politicizing it is! Yet the Democrats and MSM continue that lie even to this day!!! So dishonest! https://t.co/mT8zDFV3XN

The President also took definitive action long before Congress ever moved to respond to the virus, as they were in the middle of impeachment proceedings at the time. And he received flack from Democrats and the media for putting travel restrictions on China in January.

Pelosi was even caught on video encouraging the public to venture out to Chinatown at the end of February, when the coronavirus was already making it’s way across the country and infecting thousands of Americans.

Here she is, chewing the peppermint gum to cover the stench of midday booze breath, inviting everybody to come and get infected in Chinatown! pic.twitter.com/95aQn52jzN