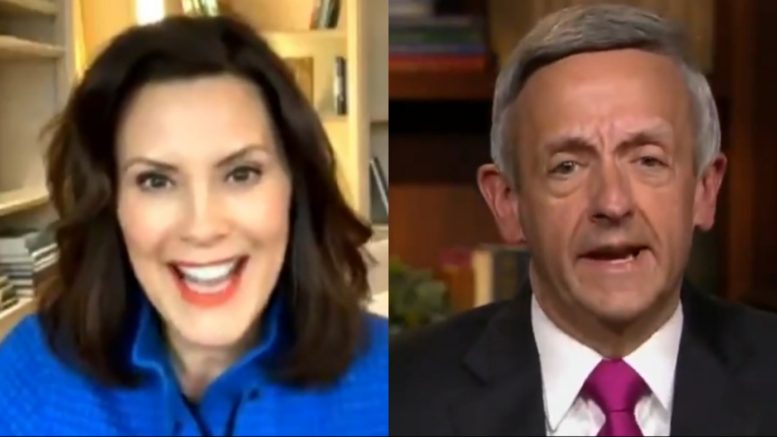 Whitmer made the comment when asked during a radio interview what she thought about states like Texas, that are banning abortions during the coronavirus crisis.

“We’ve stopped elective surgeries here in Michigan,” Whitmer said. “And some people have tried to say that that type of procedure is considered the same, and that’s ridiculous.”

“You know a woman’s health care, her whole future, her ability to decide if and when she starts a family is not an election. It is a fundamental to her life,” she added. “It is life-sustaining. It’s something that government should not be getting in the middle of.”

When pressed by Fox Business host Lou Dobbs about Gov. Whitmer, Pastor Jeffress replied, “Lou, she is a lunatic is what she is. I mean, this is sheer madness is what she’s saying.” Video Below

He then pointed out that most states right now are banning elective surgeries, such as heart procedures or cancer surgery, in order to take care of victims of the Wuhan virus.

“And yet here you have this governor, who is saying killing children is an essential surgery and she calls it ‘life-sustaining’?! Life-sustaining for who?!” Jeffress questioned.

“I mean this is absolute madness,” he continued. “It reminds me of the verse of the Bible that says, ‘Woe to those who call evil good and good evil.’ That’s the motto of the left, that’s the motto of this governor, and I think Republicans in November need to make the Democrats own this absolutely insane position.” Video Below

In ending here is audio of Gov. Whitmer commenting on abortions: