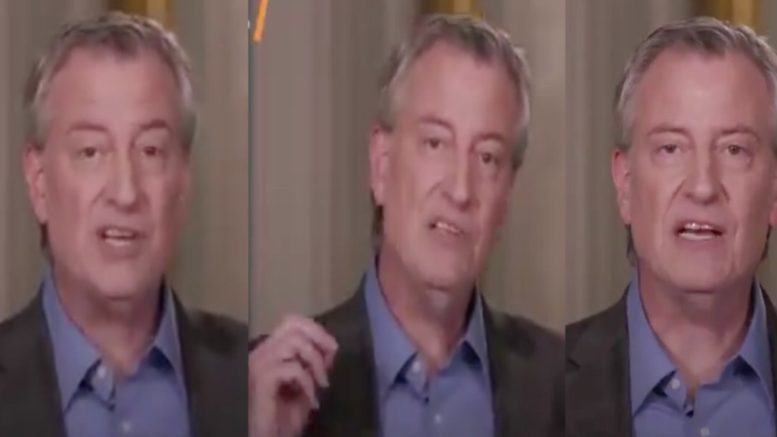 New York Democratic Mayor Bill de Blasio posted a video on Twitter Saturday, calling on the public to report places that are not enforcing social distancing.

De Blasio thanked those who are abiding by the guidelines, then said: “We still know there [are] some people who need to get the message”.

“That means sometimes making sure the enforcement is there to educate people and make clear we’ve got to have social distancing,” the New York Mayor said. “So, now it is easier than ever”.

He went on to say: “And now it’s as simple as taking a photo. All you gotta do is take the photo and put the location with it, and bang, send the photo like this and we will make sure that enforcement comes right away.”

“Text the photo to 311-692 and action will ensue,” de Blasio said. “Enforcement will come to get the help we need. Or you can use the 311 app, send that photo there and you’ll make sure, immediately, there’s follow up. Look this is important. It’s about saving lives. Sending that photo in is going to make sure that people are kept apart and that’s going to stop the disease from spreading, and that’s going to save lives.” Video Below

How do you report places that aren’t enforcing social distancing? It’s simple: just snap a photo and text it to 311-692. #AskMyMayor pic.twitter.com/WQdCcVf1Rl

@NYCMayor is a Disgrace to the USA!! #TraitorBlasio

Your communist roots are showing. I noticed you said “enforcement” and not law enforcement. Is that because the cops in your own city hate your guts?

Also diBlasio:
“BUT TRUMP IS A DICTATOR!”

I just can’t believe that you’re asking people to snitch. This is so un-American.

@realDonaldTrump can you put this governor in check. This is America, not 1940’s Germany

The Soviets and Nazis would be proud.

Just sent you a picture of Congress.

Here’s one from last night. pic.twitter.com/Di2iEbXqNz

This is why no one likes you

You want New Yorkers turning on New Yorkers and cause fights ? What are you doing!? this is an awful idea at this time. People will be miss interpreting what people are doing. It will cause violence.

Says the same guy who issues a stand down order while Ant!fa is destroys the subway system, supports bail reform that puts violent criminals on the streets and allows his officers to be attacked.
Shameful.

This is how the Nazi’s convinced Germans to turn in their Jewish neighbors.

Everyone FLOOD this with texts of what you think of it.

How about we snap pictures of illegals and text them to ICE instead?

You were encouraging people to “live their lives” and go to Chinatown parades!

Now you are going to arrest people when Karen sends you a video? 🤡🚬 pic.twitter.com/MglzX7cW7c