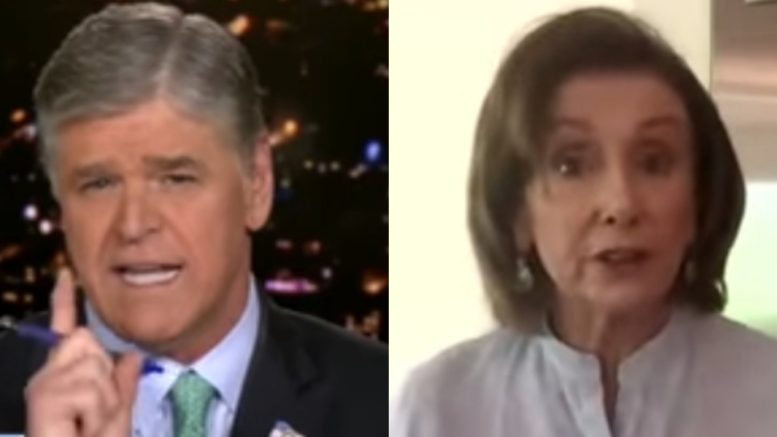 President Donald Trump took to Twitter Thursday morning, blasting House Speaker Nancy Pelosi (D-CA), demanding that she “come back to Washington” and do her job.

The president also quoted Fox News’ Sean Hannity, who had ripped Pelosi for attacking the president in a press release after Easter.

“This Easter Weekend provided me with a time for deeper prayer and reflection,” Nancy Pelosi began in her press release.

“Now more than ever, we need the truth. And the truth is that Donald Trump dismantled the infrastructure handed to him which was meant to plan for and overcome a pandemic, resulting in unnecessary deaths and economic disaster,” she claimed.

Pelosi’s press release went on to say in part: “In order to move forward, we must first understand the truth of what has put us in this position”:

Sean Hannity, in his Wednesday monologue, said that Democrats and the media are using this crisis as a “political weapon” against the president. “If the dog bites, the bee stings, if you’re feeling sad, let’s lash out at Donald Trump,” he said.  Continued Below

“[Pelosi] just authored what is nothing short of a bizarre, rage-filled, Trump obsessive rant that is full of outright lies, unending hypocrisy, breathtaking out of touch reality from her part. And according to the Speaker, after an Easter weekend after deep prayer and reflection,” Hannity said. “God apparently communicated to her that Donald Trump was responsible for the carnage caused by the coronavirus.”

“China didn’t identify the coronavirus until January 9. The first known case in the United States was January 21. And 10 days later in record time, controversial at the moment, hysteria, xenophobic, fear-mongering, racist– January 31, 10 days after the first case in the U.S., Donald Trump implemented the travel ban and mandatory quarantines,” the Fox News host continued.

Hannity then asked, “What was Nancy Pelosi doing in January? That’s right. Spending every waking moment impeaching the president. And then on January 15, 5 days after the world was warned about COVID-19, she was-all-smiles. She signed off on her impeachment Schiff-show stunt with her commemorative pens– and smiles, and selfies, and pictures.” Continued Below

“She knew the impeachment witch hunt was dead on arrival in the Senate, and yet all of January and into February, that was what the focus of her attention was on,” Hannity explained. “Nothing about COVID-19.

Hannity also pointed out that the president mentioned COVID-19 during the State of the Union address in February. “Remember this scene? Pelosi acting bizarre, pre-ripping the speech while the president was talking all about, and in some cases coronavirus. This was all her preplanned, public, made for TV temper-tantrum sideshow,” he continued.

The Fox News host noted that on February 24, the House Speaker showed up for a “publicity stunt on the crowded streets of San Franciso’s Chinatown”, adding that she was “hugging and shaking hands with supporters and encouraging everyone to come to Chinatown, saying ‘Everything is fine, safe here.'”

“What could easily be a moment of self-reflection, at the end of Pelosi’s prayers and her rant, she writes ‘A weak person, a poor leader takes no responsibility. A weak person blames others.’ Pelosi, you are that weak person. You are that poor leader. You are the reason America hates career politicians, like yourself. Even in the middle of a national emergency- pandemic, Pelosi is putting politics … before anything else. Sick, disgusting,” Hannity concluded.

President Trump tweeted Hannity in part, adding “She is totally incompetent & controlled by the Radical Left, a weak and pathetic puppet. Come back to Washington and do your job!”

Crazy “Nancy Pelosi, you are a weak person. You are a poor leader. You are the reason America hates career politicians, like yourself.” @seanhannity She is totally incompetent & controlled by the Radical Left, a weak and pathetic puppet. Come back to Washington and do your job!