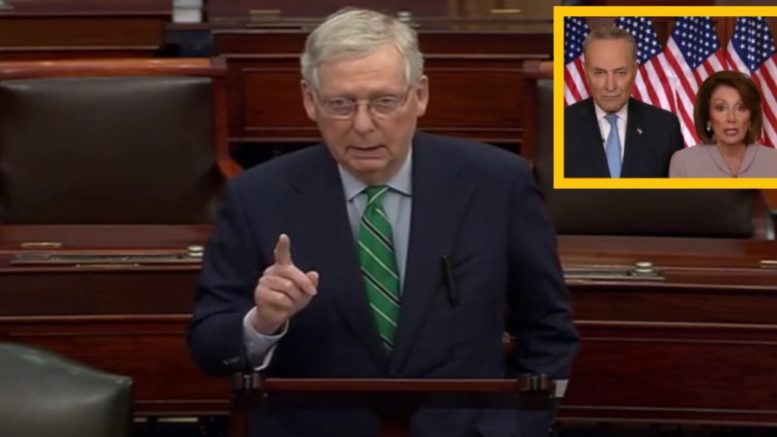 The Small Business Administration’s Paycheck Protection Program (PPP) has exhausted the last of the $349 billion in funding it was provided under the Coronavirus Aid, Relief, and Economic Security (CARES) Act to make forgivable loans to small businesses, reported Countable.

A week ago, Senate Republicans tried to pass a “clean” bill by unanimous consent that would have simply boosted PPP funding by $250 billion. Senate Democrats objected and blocked the bill.

On Thursday, the Senate met in a pro forma session, which is constitutionally mandated, absent a larger adjournment agreement. Senate Majority Leader Mitch McConnell (R-KY) spoke briefly on the floor scolding Democrats before the Senate adjourned for the week without an agreement.

“So here’s where we are. A week later, with absolutely no progress. This morning the program ran out of money and shut down, just as I warned a week ago. Even now, Senate Democrats are still blocking funding. Every Senate Republican was ready to act today. But Democrats would not let us reopen the program,” McConnell explained. Continued Below

“It’s absolutely surreal to see Democratic leaders treat support for workers and small businesses as something they need to be goated into supporting,” the Kentucky senator proclaimed. “This really should be above politics.”

The impasse will last until at least Monday when the Senate is next expected to convene for another “pro forma” session. Video Below

Senator McConnell and congressional GOP leaders, however, have shown no signs of backing down from their preference for a “clean” bill that would only include the small business funds.

“The cost of continued Democratic obstruction will be pink slips and shuttered businesses. We hope Democrats see reason soon and finally heed Republicans’ repeated calls for a funding bill that can quickly earn unanimous consent from all 100 senators and become law,” McConnell said in a joint statement on Wednesday with House Minority Leader Kevin McCarthy (R-CA).

“They are killing American small businesses. Stop playing politics Dems! Support Refilling PPP NOW – it is out of funds!” he declared.

(Related: Sean Hannity Rips Nancy Pelosi: “You Are The Reason America Hates Career Politicians, Like Yourself”)