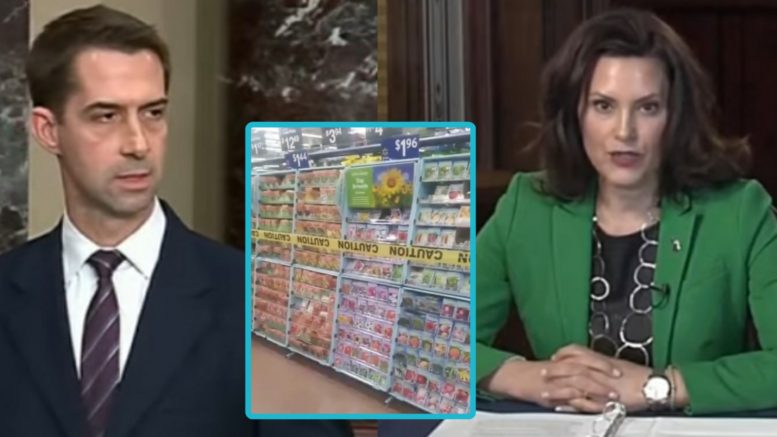 “If you’re not buying food or medicine or other essential items, you should not be going to the store,” Gov. Whitmer said on Thursday in regards to her new order. Videos have since surfaced online showing the so-called “non-essential” sections roped off in stores like Walmart.

In response, Senator Cotton, who is one of the first leaders to call attention to the “Wuhan coronavirus”, slammed Whitmer’s new order as lacking “common sense” at the very least, and he suggested she is only “auditioning” to be Joe Biden’s running mate with her “theatrical” decision.

In a statement released on Twitter, Sen. Cotton wrote the following:

“Since I first learned of the Wuhan coronavirus in mid-January, common sense has been my guide. Not Chinese communist lies. Not ‘the models.’ Not so-called ‘public-health experts.’ Just common sense. Many elected leaders have also been guided by common sense. Others haven’t.

“Governor Whitmer has taken leave of common sense with her latest dictate. She’s ordered stores to rope off garden and home-improvement sections as “non-essential.” Sure, those aren’t essential for human life. But they give cooped up families something to do with no risk to others. Continued Below

“And by reducing the square footage of stores, the order effectively increases the density of shoppers in the remaining sections of the store—which is dangerous to public health!

“Common sense should guide your actions during this pandemic. And it should guide our leaders’ decisions about how to protect your health and how to get our economy back on its feet. Common sense says you should be able to garden or paint the kids’ room.

“I get that Governor Whitmer is auditioning to be VP. Foolish, theatrical orders with no public-health benefits may generate headlines, but they undermine public confidence. Then again, Joe Biden called the China travel ban ‘xenophobic.’ So maybe those two are a good match.” Video Below

In ending, here is a video taken by an angry Michigan resident showing roped off sections at Walmart:

🤬🤬🤬🤬#MICHIGAN @GovWhitmer LOOK AT THIS NONSENSE SHE HAS IMPOSED ON HER CITIZENS….

Americans in her state can now only buy items SHE DEEMS essential. This is Communism brought to you by Dems. Outrageous and this man is pissed as he should be.@POTUS please help! pic.twitter.com/jeGUW074Rf