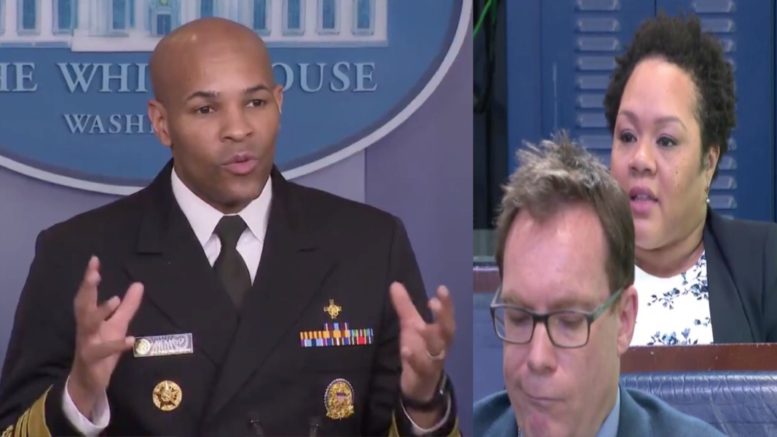 On Friday during the White House Coronavirus Task Force briefing, U.S. Surgeon General Jerome Adams fired back at PBS Newshour White House correspondent, Yamiche Alcindor, after she suggested that Adams was using “language” that may be “offensive” to minorities.

“Quick question for you: you said African Americans and Latinos should avoid alcohol, drugs, and tobacco. You also said do it for your Abuela, and Big Momma, and Pop-Pop. There’s some people online that are already offended by that language and the idea that you’re saying behaviors might be leading to these high death rates. Can you talk about whether or not people– I guess, have a response for people that might be offended by the language that you used?” Yamiche Alcindor asked the Surgeon General.

“I used the language that is used in my family,” Jerome Adams fired back. “I have a Puerto Rican brother-in-law. I call my Granddaddy, ‘Granddaddy’. I have relatives, who their grandparents ‘Big Momma’. That was not meant to be offensive. That’s the language that we use and that I use.”

“We need to continue to target our outreach to those communities. It is critically important that they understand it’s not just about them. And I was very clear about that. It’s not just about what you do, but you also are not helpless,” he continued.

Adams went on to explain that the guidelines and advice are meant for everyone. “We need everyone, black, brown, white, whatever color you are to follow the president’s guidelines, the Coronavirus guidelines. When I talked to the NAACP, three weeks ago, it’s important to note one of the things they asked me is can you help dispel the myths in the community that people actually can’t get Coronavirus if they are black? That was a myth that was actually very important for us to squash here,” Adams said. Video Below

.@Yamiche to Surgeon Gen. Adams: Do you have a response for using phrases like "do it for big mama" when addressing how communities of color can approach stemming the spread of COVID-19?

Adams: "That was not meant to be offensive, that's the language we use [in my family]." pic.twitter.com/f9RLuypsim

US Surgeon General Jerome Adams says black, Latino & other people of color should "avoid alcohol, tobacco and drugs." "We need you to step up," he says.

Some will find this language offensive after Adams stressed that behavior was not the issue for why more black ppl are dying.

Adams said he meant no offense, used his family's language & that all Americans should be avoiding substances.

Question: Will someone leave this note on @Yamiche’s desk today? https://t.co/KgnuSeyKKc

We leave you remarks from former President Obama made when he campaigned for Hillary Clinton:

Dr. Fauci: “To My Knowledge, None Of Us Have Ever Been Told To Slow Down On Testing. That Just Is A Fact”