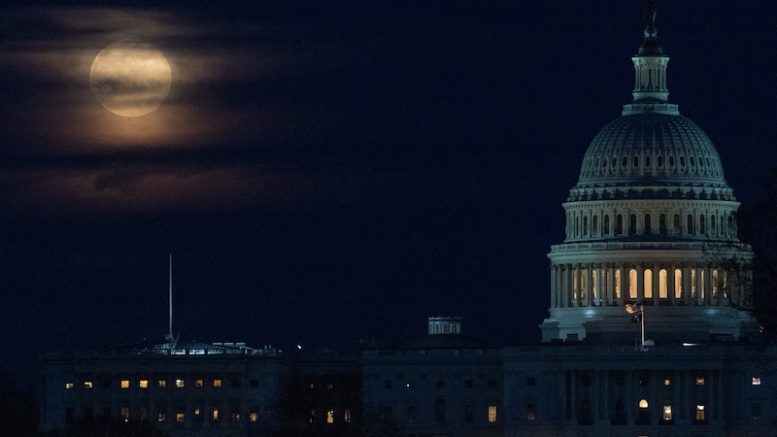 CBS News reports that Americans across the country can take a welcome break from coronavirus confinement as a super “pink moon” rises in the sky Tuesday night. It will be the largest supermoon of 2020, according to EarthSky.

The full moon of April, called the Pink Moon, will occur on Tuesday (April 7) at 10:35 p.m. EDT (0235 GMT on April 8), about 8 hours after reaching perigee, the nearest point from Earth in its orbit. This will create a “supermoon,” a full moon that appears slightly larger than average, as reported by Space.com

According to NASA Moon, “super” refers to that the Moon is a little closer to Earth and so it appears a little larger and brighter. Pink is because of the blooming of pink wildflowers in the spring. The moon won’t actually be the color pink but will be big and bright in the sky.

Pink is a nickname for the April full Moon due to the budding pink flowers here on Earth.

The Pink Moon is viewable all over the globe if weather permits. Video Below

A bright light for a dark night 🌕

Tonight, the full Moon will be at perigee — the closest point in the Moon’s orbit to Earth, making it appear bigger and brighter in the sky. 🌕✨

Listen as lunar scientist Noah Petro guides you through viewing the supermoon.#supermoonhttps://t.co/6RsN9MA86X pic.twitter.com/z1vqtJX1nA

Thank you all for your questions!!! We had a great time answering them. To learn more about tonight's supermoon, see the frequently asked questions here: https://t.co/Jzx5YoK7sz

The Week reports, clear skies make ideal viewing conditions, but if the weather doesn’t cooperate where you are, check out these live streams by Slooh and The Virtual Telescope Project. To find out when you should be on the lookout, use this moonrise calculator. Happy gazing!