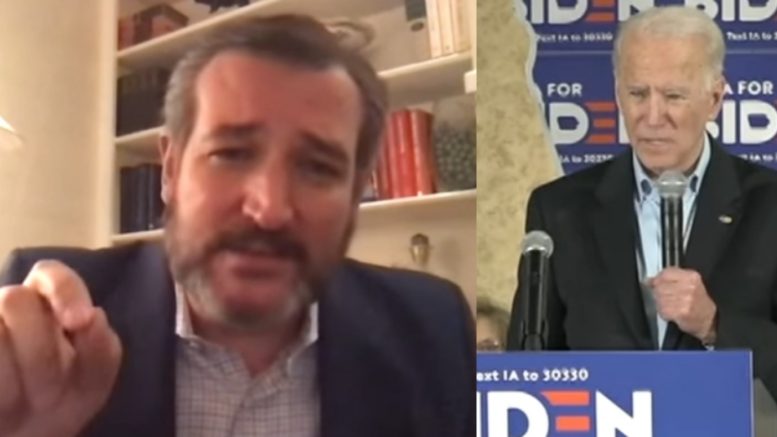 Senator Ted Cruz (R-TX) is convinced partisan Democrats, including left-leaning media sources, are “rooting” for the coronavirus pandemic to be worse and worse, and he explained why.

Cruz gave his assessment after Fox News host Laura Ingraham questioned why Joe Biden and many of his colleagues on the left are already pushing for a virtual convention, mail-in voting and no debates leading up to the fall election.

Cruz suggested Biden is “terrified of the Bernie brothers and he doesn’t want to attend a Democrat convention cause “he’s scared of the activists because he knows they don’t want him.”

“”Have you ever seen a presumptive nominee hide from the American people like Joe Biden is?” Cruz questioned. “It’s unprecedented.”

Ingraham shifted to the Democratic Party as a whole and suggested they’re already pushing the coronavirus scare to the fall because they may think it’s the only way they have chance of beating President Trump.

“Well, I think they’re scared of whatever gaffes — what Biden might say,” Cruz responded. “Look at the mainstream media trying to root for disaster. They are rooting for this pandemic to be worse be worse.” Video Below

After giving an example to back up his thoughts, Cruz declared, “We should be coming together to root for America — to root for defesting this pandemic and root for jobs coming back.”

“And I think too many partisan Democrats want to just use this catastrophe to attack Trump rather than come together to fight for our country,” he added. Video Below

Pelosi Says We Must Be ‘Prayerful’ During Impeachment Effort, Pastor Jeffress Fires Back: It’s Hard To Take Her Call To Prayer Seriously