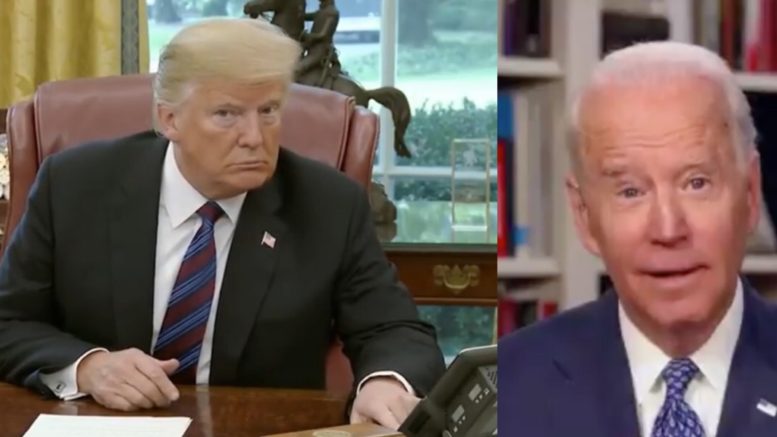 Biden had offered to call the president after Kellyanne Conway, counselor to the president, challenged him to “call the White House and offer some support.”

“Vice President Biden has been extending his advice for months, and he did so again on the air last night,” Biden’s deputy campaign manager Kate Bedingfield told Fox News last week. “As he has said repeatedly, Donald Trump is not accountable for coronavirus itself — but he is accountable for the federal government’s slow and chaotic response to this outbreak.”

“Unfortunately, Trump spent months after the virus was discovered disregarding repeated warnings from his scientific and intelligence experts, and downplaying the threat of this outbreak to the American people,” she continued. “He could have heeded Vice President Biden’s public advice not to take China’s word as they misled the world about their efforts to stop the spread.”

During a White House coronavirus task force briefing last Wednesday, the president was asked whether he would take Biden’s call.

“Oh sure absolutely… I’d love to speak with him,” President Trump confirmed. “I always found him to be a nice guy.” Continued Below

On Monday, the president took to Twitter wondering, “what ever happened to that phone call [Biden] told the Fake News he wanted to make to me?”

President Trump tweeted: “Joe Biden wanted the date for the Democrat National Convention moved to a later time period. Now he wants a ‘Virtual’ Convention, one where he doesn’t have to show up. Gee, I wonder why?”

“Also, what ever happened to that phone call he told the Fake News he wanted to make to me?” he asked. Video Below

The Biden campaign is reaching out to the White House Monday following the tweet, a Biden aide said. The aide noted the campaign had not heard from the White House about setting up a call earlier, reported USA Today.

Following the president’s tweet, Biden also took to Twitter on Monday to react: “Mr. President, I hope we can gather in Milwaukee, but that is going to depend on you stepping up and doing what needs to be done to handle this pandemic. I have laid out how you can do that … Happy to discuss anytime.”

(Related: Joe Rogan Says He Would ‘Rather Vote For Trump’ Than Joe Biden: “I Don’t Think [Biden] Can Handle Anything”)