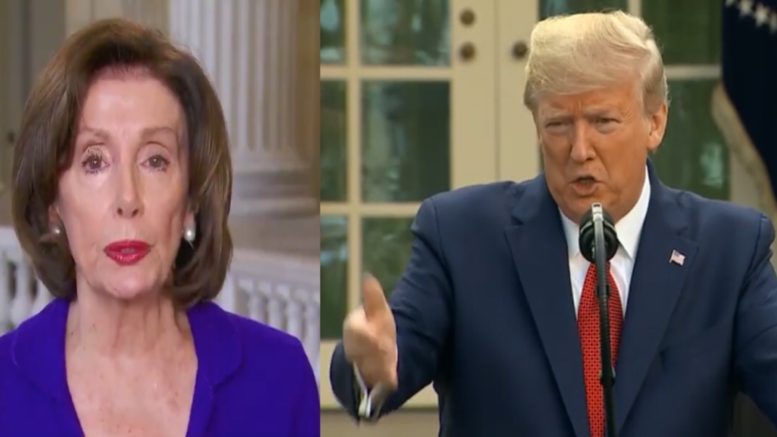 “Let me just say how sad it is, that even since the president’s signing of the bill, the number of deaths recorded has doubled from 1000 to 2000 in our country,” Pelosi said. “This is such a very, very sad time for us. So we should be taking every precaution– what the president, his denial at the beginning was deadly.”

“His delaying of getting equipment to where it– it continues, his delay in getting equipment where it’s needed is deadly. And the best thing to do would be to prevent more loss of life, rather than open things up so that– cause we just don’t know. We have to have testing, testing, testing. That’s what we said from the start before we can evaluate what the nature of the is in some of these other regions as well,” Speaker Pelosi continued.

President Donald Trump, during his interview, blasted Pelosi for blaming him for deaths amid the coronavirus pandemic, saying the House Speaker is a “sick puppy”.

“You know, it’s a sad thing. She’s a sick puppy, in my opinion. She really is. She’s got a lot of problems,” the Commander in Chief expressed. Continued Below

“And that’s a horrible thing to say, especially when I was the one … when I stopped some very, very infected, very, very sick people– thousands coming in from China, long earlier than anyone thought, including the experts,” the president explained. “Nobody thought we should do it, except me, and I stopped everybody. We had stopped it cold. It had never been before in the history of our country.”

President Trump noted that Dr. Fauci agreed with the Commander in Chief in stopping travel from other countries around the world.

“And [Pelosi] doesn’t mention that and that was early,” he pointed out. “And don’t forget she was playing the impeachment game. You know her game where she ended up looking like a fool. She was doing nothing– all she did for the first long time was impeach, impeach. This went on for years if you think about it. That’s all she did. She didn’t do anything. She couldn’t get bills passed. She’s controlled by the radical left, by AOC + 3.” Continued Below

“And then, you hear Nancy Pelosi– there’s something wrong with the woman because she knows what we’ve done. And then you look at San Franciso, … her area where she lives has become like a slum. It’s a slum,” Trump proclaimed. “And she should focus on that. Course, she lives in a beautiful house over the ocean. But, her area that she’s in charge of, has become from being one of the best in the whole country, it’s become a slum. And they don’t do anything about it. They leave it there.”

President Trump revealed that the Federal government may “get involved” to take over San Franciso and “clean it up”, adding, “It’s so bad, it’s such a mess, and yet, she’ll sit there and complain. All she did was focus on impeachment. She didn’t focus on anything having to do with pandemics. She focused on impeachment and she lost, and she looked like a fool. And frankly, it unified our party. … But she should never say a thing like she said.” Video Below

“As the President fiddles, people are dying.”@SpeakerPelosi says she wants to know what @realDonaldTrump knew about coronavirus and when he knew it, in an "after-action" investigation. pic.twitter.com/3N3G1b4XOu

Meanwhile, as the president put travel restrictions on China in January because of the coronavirus, Pelosi had tweeted:

The Trump Admin’s expansion of its un-American travel ban is a threat to our security, our values and the rule of law. Barring more than 350 million people from predominantly African countries from traveling to the US, this rule is discrimination disguised as policy.

On February 24, Pelosi urged people to come to China Town in San Franciso. “We do want to say to people, come to Chinatown, here we are. We are careful, safe, and come join us,” Pelosi said.

Pelosi, touring San Fran’s Chinatown Feb. 24: “We do want to say to people, come to Chinatown, here we are … come join us” pic.twitter.com/0FEOq9t4VM