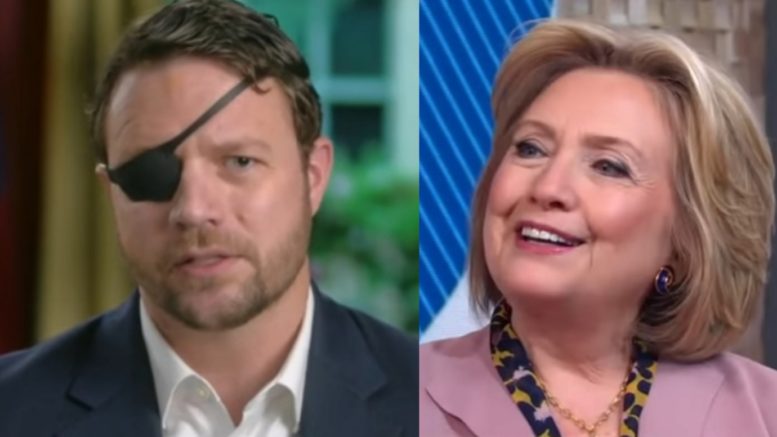 Congressman Dan Crenshaw slammed Hillary Clinton after she appeared to make a critical joke about the coronavirus pandemic and President Trump.

On Friday, Hillary tweeted, “He did promise ‘America First'” in reaction to a New York Times that pointed out the United States now “leads the world in the most confirmed coronavirus cases.”

Rep. Crenshaw replied to the former Secretary of State, where he suggested that she should delete her account because “this isn’t the time” and “this can’t be the new normal.” He then appeared on Fox News on Sunday, where he discussed why her comment was so out of line.

Delete your account. This isn’t the time. This can’t be the new normal, where American tragedy is applauded for the sake of political opportunism. https://t.co/7aYatlS8jV

During his Fox interview Crenshaw mentioned that we live in a time where politicians “find for the worst of each other” and “question each others’ intentions”.

“Now is not the time to do that,” Crenshaw argued. “There is a pandemic going on and somebody like Hillary Clinton is so used taking jabs at the president or her political opponents anytime there is an outcome that is unfortunate, but this isn’t the time. This is a tragedy for all Americans, for the entire world, and it’s just not the time.”

“This is what worries me about the future is we have difficult conversations about how to move from risk containment to risk mitigation to risk management — opening up society along with the threat of the pandemic,” he continued.
“It’s going to be easy to take swipes at each other and easy to have very disingenuous criticisms of each other and mobilize against each other, but we just can’t do that.” Video Below

Related Article: James Woods Lashes Out At Hillary Over Her Coronavirus Joke: “Salvage A Scrap Of Dignity & Disappear With Grace”