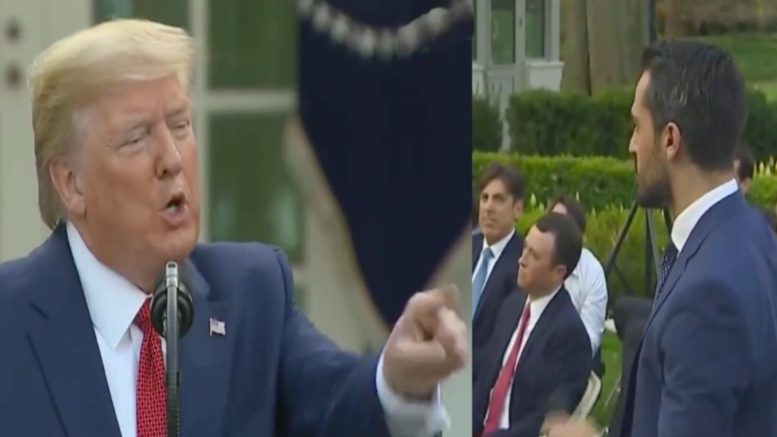 The Freedom Times previously reported, during Friday’s White House Coronavirus Task Force briefing, President Donald Trump had stressed that he wanted governors to “be appreciative” of the job Vice President Mike Pence, the Coronavirus Task Force, FEMA, and the Army Corps of Engineers are doing for everyone across America, amid the COVID-19 pandemic.

The president has repeatedly suggested that states should take the leading role in acquiring needed materials to respond to the virus, and on Friday he singled out two governors who have been outspoken in calling on the federal government to do more to facilitate the response: Jay Inslee (D-Wash.) and Gretchen Whitmer (D-Mich.), as reported by The Hill.

During the briefing at the White House Rose Garden Sunday, CNN’s Jeremy Diamond told the president: “You were talking about governors of different states and you said, ‘I want them to be appreciative’. You also said, ‘If they don’t treat you right, you don’t call.’ These are direct quotes, sir.”

President Trump stopped Diamond in his tracks to correct the CNN reporter. “But I didn’t say that. I didn’t say that, it’s such a– excuse me, are you ready? Ready, ready? Take a look at what I said. I want them to be appreciative of me, okay. And then you cut it off. It’s fake news. …You know the answers a lie. Your statement and your response and your answer is a lie because here’s the story, you ready?” Continued Below

The Commander in Chief broke it down for the CNN reporter and other reporters who were listening: “I said I want you to be appreciative of me, and then you go on, and I go on, and you cut it off.”

“Thank you. Thank you,” the president replied while he raised his arms out to his sides. Continued Below

“See, that’s why people aren’t watching CNN very much anymore. That’s why they don’t like it. That’s why your ratings are no good. Because you even, after knowing the truth for days now, you bring up the old lie. Read the rest of your question, the rest of your statement. You didn’t put in; you have to put that in. And it said in there FEMA, …  Army Corps of Engineers,” he continued, blasting the CNN reporter.

(Related: Reporters Get Called Out For Misleading President Trump’s ‘Appreciative’ Remarks About Governors)