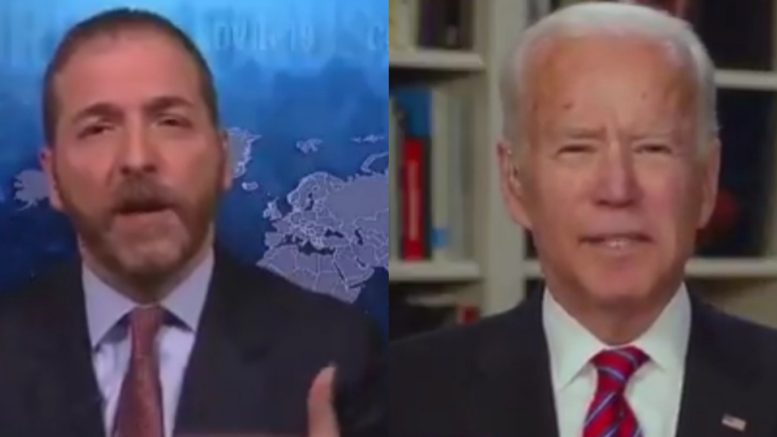 Democrat presidential frontrunner Joe Biden thought MSNBC’s Chuck Todd was being “too harsh” with one of his questions about President Trump’s handling of the coronavirus crisis.

Biden was being interviewed on Sunday’s airing of Meet The Press when Mr. Todd asked if there is already “blood” on President Trump’s hands.

“You know, your campaign put out in a critique of President Trump and said if he doesn’t do these things, he could cost lives,” Todd said to Biden. “Do you think there’s already — do you think there is blood on the president’s hands, considering the slow response? Or is that too harsh of a criticism?”

Biden replied, “I think that’s a little too harsh.”

The former Vice President went on to say that he thinks President Trump should “stop thinking out loud and start thinking deeply.”

Also during his Sunday interview with Chuck Todd, Biden suggested Bernie Sanders has “moved the ball along on a number of issues that relate to what government responsibilities are” and has made “real impact.”

We leave you with that clip: