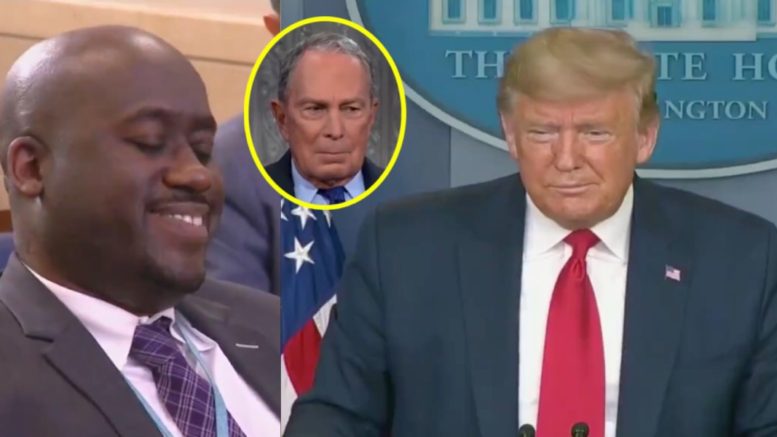 Thursday during the White House Coronavirus Task Force briefing, President Trump trolled former Democratic candidate, Mike Bloomberg, when he took a question from one of his new company’s reporters.

The president had asked the reporter, “Who are you with?”, to which the reporter responded: “I’m with Bloomberg, Mario Parker.”

“Mr. President, on Monday, did you speak with Chinese President Xi [Jinping] before you urged Americans to not blame Asian Americans for the coronavirus? We noticed that you backed off that language,” Parker asked the president.

“No, I didn’t,” the president replied. “I’m speaking with him tonight. …I didn’t like it when they came up– it wasn’t him. It was someone at a low level, mid-level, we found out, pretty much. But, they made a statement that our soldiers brought it into China. It came from China.”

“China has taken advance of the United States until I came here with Sleepy Joe Biden and Obama and Bush and everyone else. I’m not blaming them, I’m blaming everybody. They were allowed to– 500 billion dollars a year they were taking out. We had trade deficits that were so large. Nobody’s ever seen anything like it,” the Commander in Chief explained. (Continued Below)

The President went on to say that the administration has “changed” the way the United States is doing business with China. “Now we’re taking in billions of dollars. We gave some to our farmers because you know, China targeted our farmers. And our farmers are very happy. And our farmers got through a very rough period, because of what I was able to do– took the money from China and gave it the farmers,” Mr. Trump said.

“China took advantage of the United States, and you know what? I don’t blame China for that. I blame the people that were right here because they should have never allowed it to happen. But the relationship with Chinas been a very good one,” he added.

Parker then asked: “Mr. President, did President Xi ask you to calm that language down, or to not use that language?” (Video Below)

“He never asked me to calm it down, no. Somebody might have spoken to somebody. But nobody spoke to me about it. I think it was time though, [be]cause you know, I talk about the Chinese Virus, and I mean it. That’s where it came from,” President Trump said.

“You know, if you look at Ebola, you look at Lyme, Lyme-Connecticut, you look at all these different horrible diseases, they seem to come with the name with the location. And this was the Chinese Virus. But, I don’t have to say it if they feel so strongly about it. We’ll see,” he added.

(Related: Democrat NJ Governor Says He Is ‘Grateful’ For Pres Trump’s Coronavirus Response: “We Have A Very Good Relationship”)