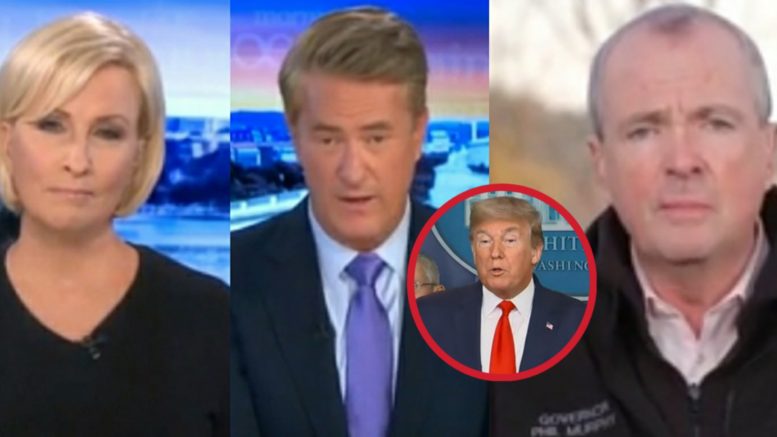 While appearing on Thursday’s airing of Morning Joe, New Jersey Governor Phil Murphy had nothing but positive things to say about President Trump’s handling of the coronavirus crisis.

Murphy, who is a Democrat, also discussed why he and the president have been able to work through the problem together despite being from different parties.

Related Article: Cuomo Voices Gratitude To Trump’s Team For Being ‘On It’: “They’ve… Been Doing Everything That They Can Do”

“I think this is something that none of us have ever lived through before,” Gov. Murphy told MSNBC’s Joe Scarborough and Mika Brzezinski. “I don’t get to wake up every morning and say, ‘Listen, I’m going to pick president “X” or “Y”. The president is Donald Trump. The vice president is Mike Pence. We have a very good relationship in terms of communication.”

He went on to praise President Trump for taking the initiative to help fulfill some New Jersey’s needs during this time that the state is unable to provide on their own.

“We are working very well with FEMA region two and with the Army Corps of Engineers building four field hospitals — that was a decision the president himself took and I’m grateful for it,” Murphy said.

“We are expanding our healthcare workforce — that’s largely on us, but we’ve got a good working relationship. We have no choice,” he declared.

“And I think we’re all sort of, at the end of the day, we’re all in this together,” Gov. Murphy concluded. Video Below

Gov. Murphy is the latest among other Democrat governors, including Andrew Cuomo (NY) and Gavin Newsom (CA), who have spoken highly of Trump’s handling of the crisis thus far.