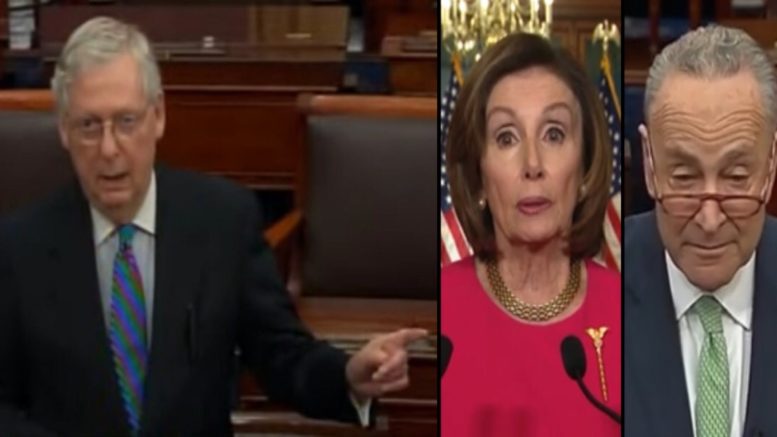 On Monday, Senate Majority Leader Mitch McConnell (R-KY) lashed out at Democrats for their latest stimulus demands after three days of negotiations failed to yield a deal on a Senate coronavirus bill.

Senator McConnell stepped to the podium and revealed items that he called the “Democratic wish list,” which included such things as tax deductions to solar and wind energy companies and new emissions standards for the airlines.

“Are you kidding me?” Senator Mitch McConnell asked on the floor.

“This is the moment to debate new regulations that have nothing whatsoever to do with this crisis? That’s what they’re up to over there,” he said. “American people need to know it.”

“Democrats won’t let us fund hospitals or save small businesses unless they get to dust off the ‘Green New Deal,’” the Senate Majority Leader vented.

McConnell warned Democrats are playing with fire by dragging out the talks, pointing to the morning’s drop in the stock markets, which have wiped out gains made since President Trump won the 2016 election, as reported by The Hill. (Continued Below)

“I hear the markets are not doing well today. They’d like to ask the question of us, why not move? Why are Democrats filibustering the bipartisan bill they helped write?” the GOP leader asked.

Senator McConnell also slammed Democrats for blocking funding for hospitals and medical supplies, which was included in a $1.8 trillion bill that failed to advance on a 47-47 procedural vote Sunday.

“I’d like to see Senate Democrats tell small business employees in their states who are literally being laid off every day that they’re filibustering relief that will keep people on the payroll because Democrats’ special interest friends want to squeeze employers while they’re vulnerable,” he stated. (Continued Below)

“One of Speaker Pelosi’s top lieutenant in the House said a few days again, and this is a direct quote, ‘This is a tremendous opportunity to restrict things to fit our vision’. That was the Democratic Whip in the House. … Reminds me of the definition of Washington gaffe, when a politician in Washington tells you what it really means,” McConnell said.

“They ought to be embarrassed!” he declared. “In fact, I’ve heard from some of them who are embarrassed. … This is not a juicy political opportunity. This is a national emergency.”

“Yesterday morning the Speaker of the House flew back from San Francisco and suddenly the Senate’s serious bipartisan process turned into this leftwing episode of supermarket sweep– unrelated issues, left and right,” Senator McConnell added. (Video Below)

The American people expect us to act. If we fail, it will be because Senate Democrats are continuing to dither while the country expects bold, bipartisan action. pic.twitter.com/23pFHoDtCl

(Related: Rep. Crenshaw Rips Schumer’s Excuse For Blocking The Coronavirus Stimulus: “We Will Not Forget This”)

Lake Reacts to Cheney Vowing to Campaign Against her With Dems: ‘Turns Out, she Really is a Democrat After All’