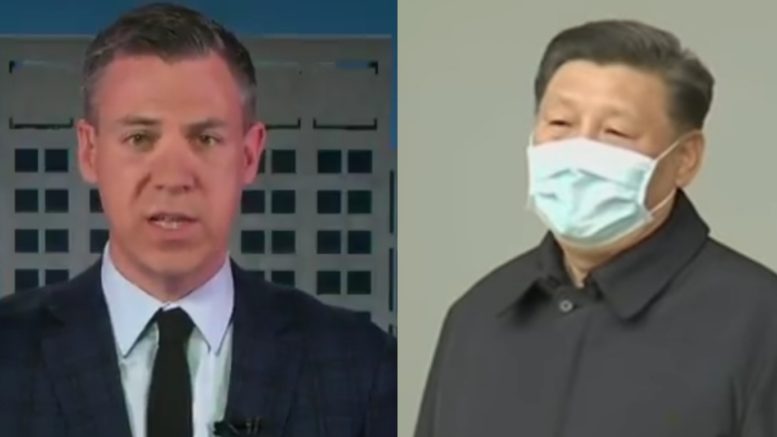 While joining David Asman of Lou Dobbs Tonight, Congressman Jim Banks (R-IN) unveiled his plan to hold China accountable over what he considers as their “role and negligence” in allowing the coronavirus outbreak to spread to a global catastrophe that is having grave impact on both American citizens and the economy.

In order to hold China accountable, Banks thinks they should “pay reparations”, and he outlined three ways in which the United States could force them do that, which are as follows: Force China to relieve U.S. debt, establish coronavirus victim relief fund through tariffs and stop VA & DOD medical equipment purchases from China.

Banks said, “I’ve been all over my district this week, I’ve heard from so many constituents who have been negatively affected by this disaster. And they’re starting to ask the question ‘When are we going to hold China accountable for their role and negligence that led to this coronavirus disaster in the United States?'”

He continued, “So, I’ve called on President Trump to do what he can to force the Chinese to pay reparations, whether by forgiving the over one trillion dollars that China holds to our national debt, or by instituting tariffs, that we could use funding from tariffs to set up a coronavirus victim relief fund and help those who have been put of work, for those who have been infected.”

Banks then brought up the idea of not purchasing the “sheer amount” of medical equipment the that the United States gets from China, which is used in the VA and DOD healthcare networks.

“The VA, the largest healthcare network in the world, purchases an incredible amount of equipment from China and we should stop that immediately,” Banks declared. Video Below

Related Article: Pastor Jeffress Advises Americans To Do Two Things To Help Make It Through The Pandemic

“On top of that, we should absolutely force the Chinese to forgive the American debt that they hold over a trillion dollars,” Banks said in relation to the corona relief bill that is set to soon be passed by Congress.

“There’s no reason that the Americans should shoulder the burden for that — that my daughter’s generation should pay the cost for what the Chinese have inflicted upon this country because of their negligence and how they refuse to prevent the spread of the coronavirus coming to the United States to begin with,” he concluded. Video Below

Making China Pay: @RepJimBanks says he has called on @POTUS to make China pay reparations for its negligence that led to the Coronavirus disaster in the United States. #KAG2020 #AmericaFirst #Dobbs pic.twitter.com/LUXBqnYWDb