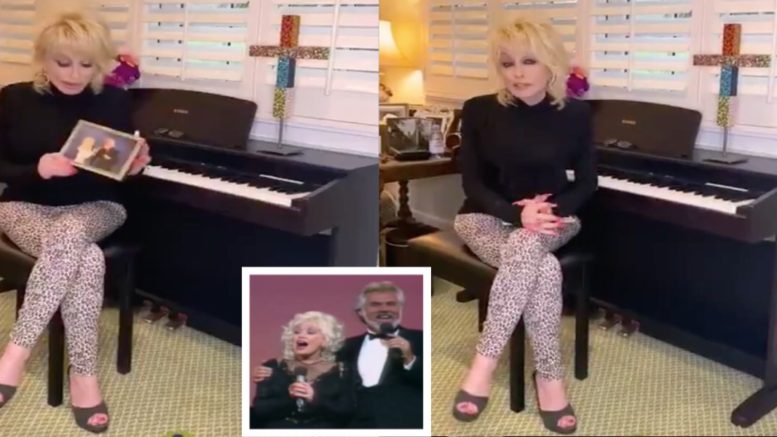 In a heartfelt response to legendary country singer Kenny Rogers, Dolly Parton took to Twitter on Saturday after she learned of her friend’s passing.

“I will always love you,” Parton said in a video message, quoting one of her most famous songs.

Kenny Rogers passed away late Friday at age 81, according to a statement posted by his family and died peacefully at home in Sandy Springs, Ga., of natural causes at 10:25 p.m. The family is planning a private service “out of concern for the national COVID-19 emergency,” a statement posted early Saturday read. A public memorial will be held at a later date, reported Fox News.

Dolly Parton said that she found out Saturday morning of her friend’s passing when she turned on the TV to check on the coronavirus crisis.

“I know that Kenny’s in a better place than we all are today, but I’m pretty sure he’s gonna be talking to God, sometime today, if he ain’t already. And he’s gonna be asking him to spread some light on a bunch of this darkness going around here,” the country music singer said.

“I loved Kenny with all my heart, and my heart’s broken, and a big old chunk of it’s gone with him today,” Parton heartfully expressed. “And I think that I can speak for all of his family, his friends, and fans when I say that ‘I will always love you.'” (Continued Below)

Parton held up a picture of herself and Kenny Rogers and said, “I just happen to have this picture when I walked out this morning of us. … God bless you, Kenny. Fly straight to the arms of God.”

“And to the rest of you, keep the faith,” she added.

Parton and Rogers made musical magic in 1983 with the duet “Islands in the Stream.” The song, written by Bee Gees Barry, Robin and Maurice Gibb, topped the U.S. pop, country, and adult contemporary charts and was a smash worldwide, reported New York Daily News. (Video Below)

So you be safe with God and just know that I will always love you, dolly.

The Rogers family is sad to announce that Kenny Rogers passed away last night at 10:25PM at the age of 81. Rogers passed away peacefully at home from natural causes under the care of hospice and surrounded by his family. https://t.co/adxAgiMW2s pic.twitter.com/nggWiiotMT

Kenny Rogers and Dolly Parton sing “Islands In The Stream”:

Dolly Parton Issues A Statement On The Death Of Charlie Daniels: “Charlie Went Straight To Heaven”