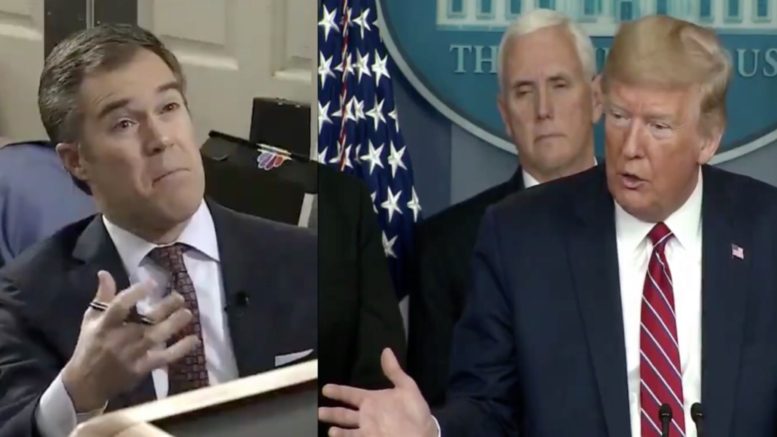 Members of the Coronavirus Task Force held a press briefing Friday to give an update on the COVID-19 pandemic.

During the briefing, President Donald Trump took questions from reporters and lambasted NBC’s White House correspondent, Peter Alexander, and the company he reports to for promoting “sensationalism”. The push back was the result of Alexander challenging the president’s statement that he was hopeful about the efficacy of a drug that may help with the coronavirus.

“The American people are looking for answers and they’re looking for hope,” the president told Alexander. “And you’re doing sensationalism. And the same with NBC and Comcast. I don’t call it Comcast, I call it Concast, for whom you work.”

“Let me just tell you something: That’s really bad reporting. And you ought to get back to reporting instead of sensationalism,” President Trump recommended, then moved on to John Roberts from Fox News. But before taking the next question he pointed to Alexander and said, “You ought to be ashamed of yourself.” (Video Below)

2⃣Alexander attacks Trump's positivity, accuses him of "misrepresenting," implies people should not have hope. pic.twitter.com/GQOqqa2hwq

After Winning His Battle Against The Coronavirus, Rand Paul Immediately Begins Volunteering At Local Hospital