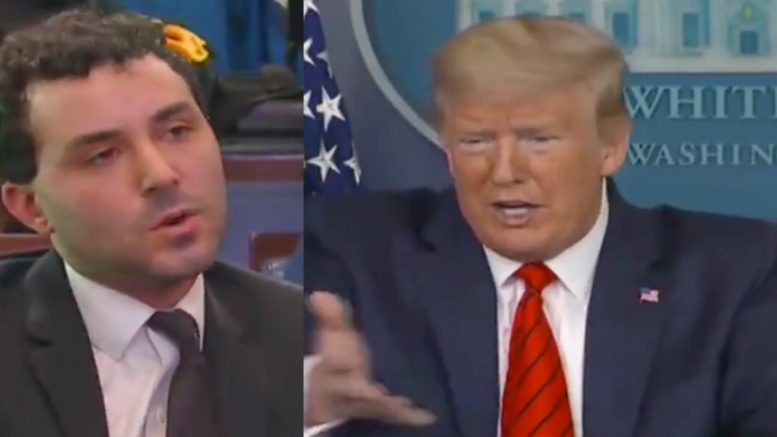 During the briefing, President Donald Trump took questions from reporters and was asked about members in Congress who have been tested positive for the coronavirus.

Rep. Mario Diaz-Balart (R-FL) on Wednesday became the first member of Congress to announce that he has tested positive for coronavirus, saying he had been stricken with a fever and headache this weekend.

“In an abundance of caution, after votes on Friday, March 13th, Rep. Mario Diaz-Balart decided to self-quarantine in Washington, D.C, and not return to South Florida because of his wife Tia’s pre-existing conditions that put her at exceptionally high risk,” his office said in a statement. “On Saturday evening, Congressman Diaz-Balart developed symptoms, including a fever and a headache.  Just a short while ago, he was notified that he has tested positive for COVID-19. While in quarantine Diaz-Balart has been working from his apartment in Washington, D.C.”

Rep. McAdams, on Twitter, wrote that he was “isolated” at home when he developed “a fever, a dry cough and labored breathing,” adding that he was conducting meetings by telephone and urged everyone to take the virus “seriously.” (Continued Below)

A reporter on Thursday had asked President Trump during the briefing: “Members of Congress are now being tested positive for Coronavirus. … two dozen are self guaranteeing– do you have any guidance for Congress?”

The Commander in Chief responded: “I know all of them. I don’t know if they are sitting like you people are sitting. You’re actually sitting too close. We should probably get rid of about another 75-80% of you. I’ll have just two or three that I like in this room. I think that’s a great way of doing it. We’ll just be doing a new way of doing it.”

“But, you’re actually much too close,” he told the reporters in the room. “You two should leave immediately. But look, look, I know all of them. They tested positive. Hopefully, they’re all going to get better. And it’s one of those things.” (Video Below)

“You are actually sitting too close. Really, we should probably get rid of about another 75-80% of you. I’ll have just two or three that I like in this room.. You two, you should leave. Immediately.”

On Wednesday, President Trump described himself as a “wartime president” fighting an invisible enemy and invoked rarely used emergency powers to marshal critical medical supplies against the coronavirus pandemic. The Senate, meanwhile, approved an aid package that will guarantee sick leave to workers who fall ill, Fox News reported.

Trump tapped his authority under the 70-year-old Defense Production Act to give the government more power to steer production by private companies and try to overcome shortages in masks, ventilators and other supplies, as per Fox News.

He also tweeted on Wednesday: “I only signed the Defense Production Act to combat the Chinese Virus should we need to invoke it in a worst case scenario in the future. Hopefully there will be no need, but we are all in this TOGETHER!”