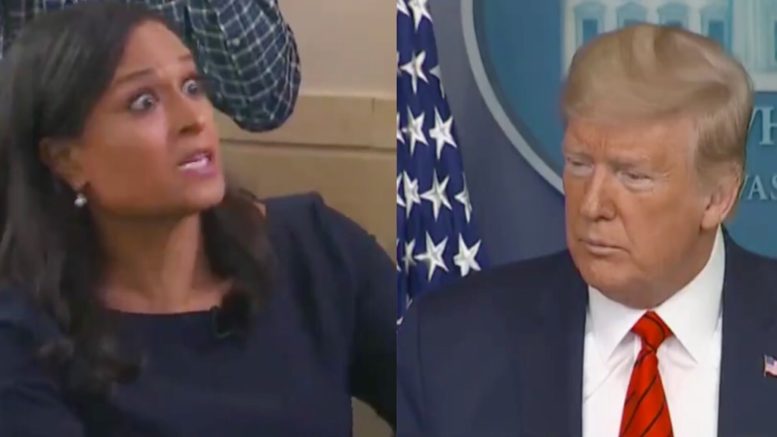 During the briefing, President Donald Trump took questions from reporters and was asked why the United States was “not more prepared for testing” presumably at the beginning of the outbreak of the coronavirus.

President Trump explained on Thursday that COVID-19 “could have been stopped pretty easily if everybody had known about it a number of months” earlier, had China made it public to the world.

“The whole world is suffering because of it,” said the Commander in Chief.

NBC’s Kristen Welker asked the president: “You said a few days ago you did have a sense that this was a pandemic, it was coming– so why was the United States not prepared for more testing?”

President Trump responded: “We were prepared. The only thing we weren’t prepared for was the media. The media has not treated it fairly.” (Continued Below)

“I’ll tell you how prepared I was: I called for a ban from people coming in from China long before anybody thought– in fact, it was your network. I believe they called me a racist because I did that,” the president fired back.

“It was many people in the room, they called me racist and other words because I did that– because I went so early,” the president informed the reporters in the briefing room. “So when you say we weren’t prepared, had I let these tens of thousands of people come from China a day, we would’ve had something right now that would have been– you wouldn’t even recognize it, compared to where we are.”

“How many people have passed away? How many people have died as of this moment? You could multiply that by a factor of many, many, many. So when you say ‘I wasn’t prepared’, I was the first one to do the ban. Now other countries are following what I did. But the media doesn’t acknowledge that. They know it’s true, but they don’t want to write about it,” he added. (Video Below)

The media called him Racist.

During Sunday night’s debate, while leveling criticism at President Donald Trump’s handling of the national response to the coronavirus pandemic, former Vice President Joe Biden said the Trump administration refused to get coronavirus testing kits from the World Health Organization.

The U.S. would never have needed complete kits from WHO. Even if it had adopted the WHO testing approach, it already had access to all the necessary materials.

The U.S. chose to use its own test, rather than the one circulated by WHO. Other nations, such as China, Japan, and France, also developed their own tests. Multiple public health experts said that is not unusual.