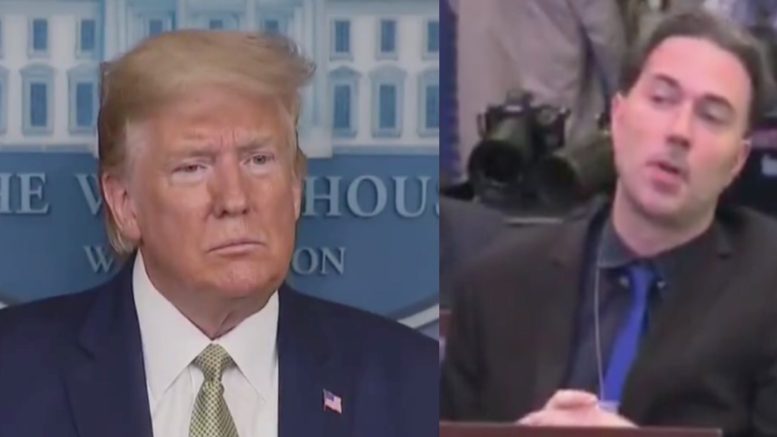 President Donald Trump took to Twitter Monday to say: “The United States will be powerfully supporting those industries, like Airlines and others, that are particularly affected by the Chinese Virus. We will be stronger than ever before!”

On Tuesday he also wrote: “Cuomo wants ‘all states to be treated the same.’ But all states aren’t the same. Some are being hit hard by the Chinese Virus, some are being hit practically not at all. New York is a very big ‘hotspot’, West Virginia has, thus far, zero cases. Andrew, keep politics out of it.”

According to the Centers for Control and Disease Prevention (CDC), COVID-19 is a respiratory disease caused by a novel (new) coronavirus that was first detected in China, and which has now been detected in more than 150 locations internationally, including in the United States. The virus has been named “SARS-CoV-2” and the disease it causes has been named “coronavirus disease 2019” (abbreviated “COVID-19”).

On Tuesday, President Trump responded to criticism of using the phrase Chinese Virus. “China was putting out information, which was false that our military gave this to them. That was false. And rather than having an argument, I said I have to call it from where it came from. It did come from China,” the Commander in Chief explained.

“I think it’s a very accurate term, but I didn’t appreciate the fact that China was saying that our military gave it to them. Our military did not give it to anybody,” he said. (Continued Below)

A reporter told President Trump on Tuesday that critics say using the term “Chinese Virus” creates a “stigma”, to which the president responded, “No, I don’t think so. I think saying that saying our military gave it to them, creates a stigma.”

Last week, a Chinese official promoted a conspiracy theory claiming that the United States military may have brought the coronavirus to China and that it did not originate in the city of Wuhan.

“CDC was caught on the spot. When did patient zero begin in US? How many people are infected? What are the names of the hospitals? It might be US army who brought the epidemic to Wuhan. Be transparent! Make public your data! US owe us an explanation!” Foreign Ministry spokesman Zhao Lijian tweeted. (Video Below)

President Trump responding to the criticism:

President Trump asked about his use of the phrase “Chinese Virus”:

REPORTER: “Critics say that using that phrase creates a stigma.”

TRUMP: “No, I don’t think so. I think saying that our military gave it to them creates a stigma.”

As reported by the CDC:

Coronaviruses are a large family of viruses that are common in people and many different species of animals, including camels, cattle, cats, and bats. Rarely, animal coronaviruses can infect people and then spread between people such as with MERS-CoV, SARS-CoV, and now with this new virus (named SARS-CoV-2).

The SARS-CoV-2 virus is a betacoronavirus, like MERS-CoV and SARS-CoV. All three of these viruses have their origins in bats. The sequences from U.S. patients are similar to the one that China initially posted, suggesting a likely single, recent emergence of this virus from an animal reservoir.

Some international destinations now have ongoing community spread with the virus that causes COVID-19, as do some parts of the United States. Community spread means some people have been infected and it is not known how or where they became exposed.

Biden: “No, I Don’t Think C0VID Is Here To Stay, But Having C0VID In The Environment Here & In The World Is Probably Here To Stay”