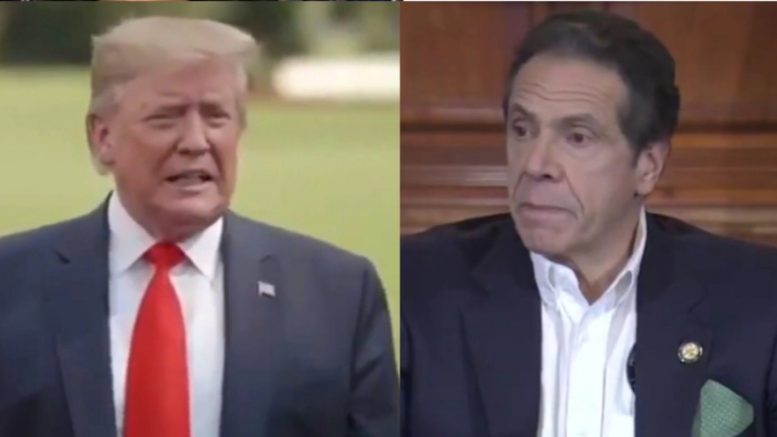 On Tuesday, New York Governor Andrew Cuomo voiced his gratitude to President Donald Trump and the corona task force team, saying they are “on it,” and “doing everything that they can do” in the wake of COVID-19.

“I think the president was 100% sincere in saying that he wanted to work together in partnership, in the spirit of operation,” said Governor Cuomo.

Governor Cuomo also told MSNBC’s Rachel Maddow in an interview on Tuesday that he had a “very good conversation with the president” and told the Commander in Chief: “Look, forget Democrat-Republican. We’re Americans, and we’re talking about life and death.”

“We’re going to have a tragedy in this state. We have the highest number of cases in the United States. We’re gonna have a real tragedy where people die because they couldn’t get the right health care. And I need the help of the federal government. I need that partnership,” he said, explaining his conversation with the president. (Continued Below)

(Related: Gov. Cuomo Praises Trump & Pence Over Their Quick Response On Coronavirus: “Kudos Where Kudos Are Due”)

The New York Governor said that he also told President Trump that he put out his hand in partnership adding, “I want to work with you. I’ll be a good partner. I need your help. Let’s do what we were elected to do. Let’s fulfill our constitutional duty. And the president said, ‘Yes’. I believe he’s sincere. More than just belief, he’s acted on it, Rachel. … I believe he is doing what he has to do, and I respect him for it.”

Gov. Andrew Cuomo: President @realDonaldTrump and his team are “on it,” “doing everything that they can"https://t.co/Jb0k5GtZvF pic.twitter.com/SZBX3onZkT

Gov. Andrew Cuomo praises President @realDonaldTrump’s coronavirus response: “he's doing what he has to do and I respect him for it”https://t.co/HF0J77TGfE pic.twitter.com/PVt9fCLtH1