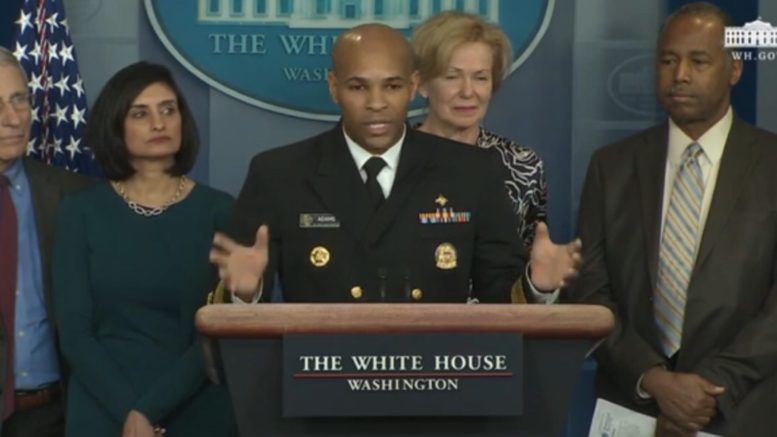 The White House coronavirus task force held a news conference on Saturday to give an update on COVID-19. This comes after the president, during a press conference Friday, declared a national emergency to curb the spread of the coronavirus pandemic after more than 2,500 cases were confirmed in the United States.

During the briefing, U.S. Surgeon General VADM Jerome M. Adams directly told the press: “no more finger-pointing or criticism” and called for “less stories looking at what happened in the past.”

“I want you all to understand some straight talk from the nation’s doctor,” the U.S. Surgeon General began. “We really need you all to lean into and prioritize the health and safety of the American people.”

“No more bickering, no more partisanship, no more criticism, or finger-pointing,” he suggested to the reporters. “There will be plenty of time for that, but we all need to hit the reset button and lean into moving forward.”

“The health and safety of the American people are the top priority–more stories on how people can protect themselves, more on how people can get the resources that they need that we’ve unleashed from the federal government and state and local governments. Less stories on looking at what happened in the past, again there will be time for that,” Jerome M. Adams said.

During the news conference, President Donald Trump said that he had been tested for the coronavirus on Friday night after being in contact with at least three people who later tested positive for the virus. (Continued Below)

The president told reporters during the news conference Saturday that the test had been sent to the lab and that he expects to have the results within a day or two.

“I had my temperature taken coming into the room. … I also took the test last night,” President Trump said. “And I decided based on the press conference yesterday– people were asking did I take the test.” (Video Below)

The Surgeon General calls for no more bickering, no more partisanship, no more criticism or finger pointing, and less stories about what happened in the past pic.twitter.com/CpM4vzCWaf

A message from the U.S. Surgeon General

Washing your hands is one of the best ways to help stop the spread of #COVID19. The @Surgeon_General explains the five key steps you should take to ensure you're washing your hands correctly. Find more info about COVID-19 at https://t.co/4OjZj2saKk. #Coronavirus pic.twitter.com/PKfj0tbXEL