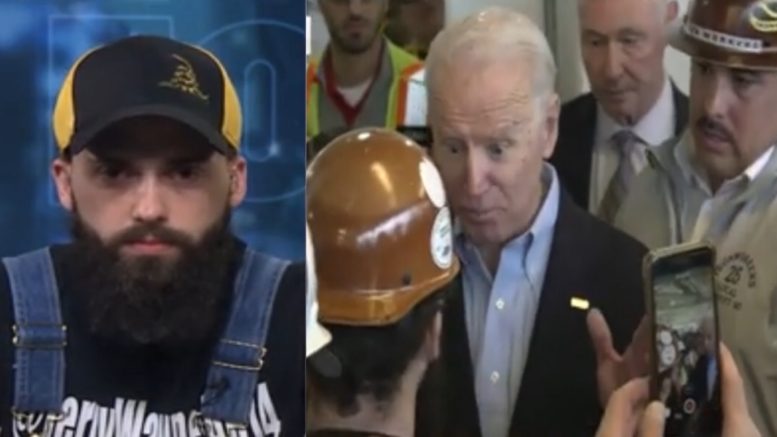 Former Vice President Joe Biden didn’t like something that an autoworker confronted him with pertaining to guns in Detroit, Michigan on Tuesday and fired back by cussing at the autoworker.

Jerry Wayne is the Michigan voter who confronted former Vice President Joe Biden over his stance on guns, and he spoke with “Fox & Friends” Wednesday morning.

Wayne had told Joe Biden that he is trying to “take away our guns” on Tuesday.

“Wait! Wait! Wait! We’ll take your AR-14’s away!” Biden said, to which the autoworker told Biden “This is not okay”.

Biden then told Wayne, “Don’t try me, pal. Do you want to go outside?” (Continued Below)

The autoworker had told Biden, “You’re working for me, man!”, to which Biden responded: “I’m not working [for you]– come here, brave man. Don’t be such a horse’s ass.”

Jerry Wayne told “Fox & Friends” Wednesday that he had no idea if Joe Biden was “going to be taking questions”, but said that Biden “started making his rounds shaking hands and made it to my way and I stopped him.”

“I started to ask him a question. He could have easily said, ‘I’m not taking questions’, and I would’ve very respectfully walked away. But he wanted to listen to my question and I don’t think he was ready for it,” Wayne said. (Continued Below)

He said he asked Biden “How he was going to be helping get us work– us Union workers, work in the future? We seem to be doing fine at the moment, but there’s always room for improvement. I wanted to give him the opportunity to show us where that improvement could come from. And I also asked him how he wanted to get the vote of the working man when a lot of us wheeled arms. We bare arms, and we like to do that.”

“If he wants to give us work and take our guns, I don’t see how he’s gonna get the same vote. … It’s a little bit disturbing to see that– a politician wants to take away my right to defend myself,” he said after a video clip was played of remarks made by Joe Biden.

Asked which Joe Biden he belives, Wayne said, “The one who wants to take my guns. … He doesn’t need to touch anyone’s weapon at all. What we need to do is concentrate on teaching people how to respect firearms and how to use them, not take them away.” (Video Below)

(Related: Beto O’Rourke Responds After Rep. Buck Dares Him To Take Away His AR-15: “These Are Weapons Of War”)