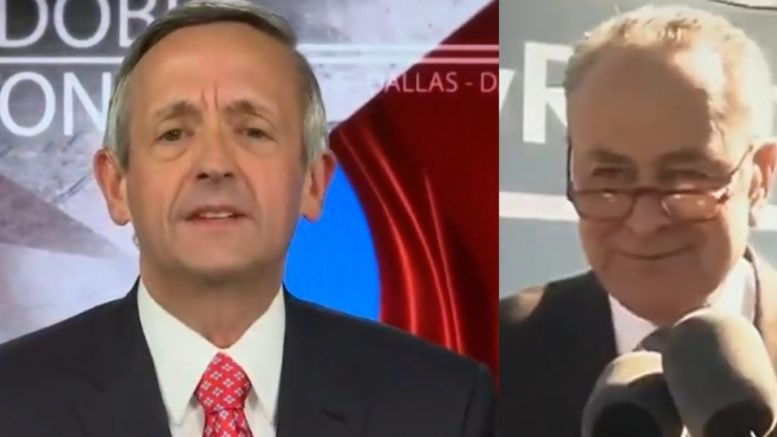 On Friday’s airing of Lou Dobbs Tonight, Pastor Robert Jeffress suggested that Leftists are “anti-God” and believe in “the god of their imagination.”

Jeffress made the assessment while responding to how the how the media is treating Vice President Mike Pence’s handling of the coronavirus.

Gregg Jarrett, who was filling in for Dobbs, flashed a tweet on the screen showing a New York Times Magazine writer’s reaction to Mike Pence and other leaders of the Coronavirus Task Force praying before one of their meetings.

The writer captioned the photo: “Mike Pence and his coronavirus emergency team praying for a solution. We are screwed.”

Jarrett asked Pastor Jeffress, “Is the left anti-God? They’re not anti-God, are they? Are they against religious freedom?”

“Yes they are,” Jeffress replied. “They are Atheists, if you really want to know the truth about it. They say — some of them — they believe in God. The god they believe in is the god of their imagination, not the God of the Bible.” Video Below

“You can’t write that and ridicule somebody for praying and believe in the true God,” Jeffress added.

“And, you know, Abraham Lincoln wasn’t too proud to call upon God. George Washington, John Adams — all of our Forefathers just about — praying to God for strength, and that is just what has made this country great,” he declared. “And thank God we have a president who recognizes that.” Video Below