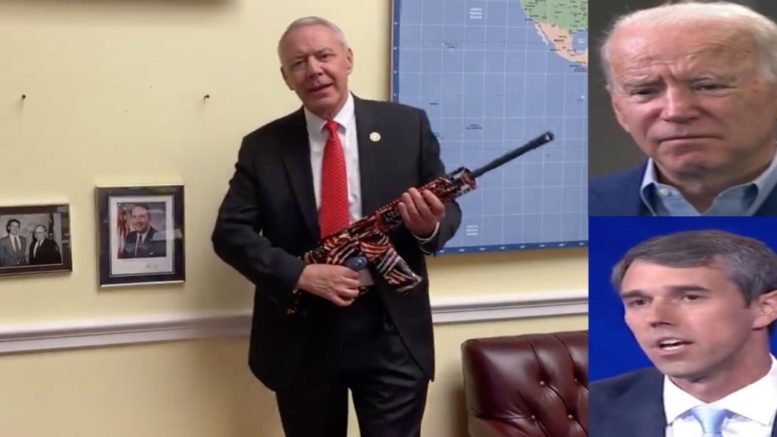 Congressman Ken Buck (R-CO) took to Twitter on Friday with a message to Democratic presidential candidate Joe Biden and former candidate Beto O’ Rourke, daring them to take away his AR-15 out of his office.

“I want to make something clear: I’m going to guarantee you this is not the last you’re seeing of this guy,” Joe Biden told the crowd in Texas. “You’re going to take care of the gun problem with me. You’re going to be the one who leads this effort. I’m counting on you. We need you badly, the state needs you, the country needs you, you’re the best.”

Beto, who dropped out of the Democratic presidential race in November 2019, made gun confiscation a central part of his platform, telling voters, “hell, yes, we’re going to take your AR-15, your AK-47” during a Democratic debate in September.

Later in his campagin, Beto admitted that police would “visit” gun owners unwilling to sell their semi-automatic rifles to the government in order to “recover that firearm and make sure that it is purchased.”

While eating at Whataburger on Tuesday, Joe Biden said while sitting next to Beto: “If I win, I’m coming for them”, appearing to refer to guns. (Continued Below)

(Related: Democrat Senator Coons Scolds Beto O’Rourke For Promising ‘To Take Your AK-47’: ‘That Clip Will Be Played For Years’)

Rep. Ken Buck posted a video message on Twitter Friday for the gun grabbers: “I have a message for Joe Biden and Beto O’Rourke. If you want to take everyone’s AR-15 in America, why don’t you swing by my office in Washington, D.C., and start with this one?” Buck asked before grabbing the gun from its mount on the wall behind him.

“Come and take it,” he dared while holding his AR-15 in his office. (Video Below)

I have just one message for Joe Biden and Beto O’Rourke, if you want to take everyone’s AR-15s, why don’t you swing by my office in Washington, D.C. and start with this one?

Come and take it. #2A pic.twitter.com/jG2SiXetov

Joe Biden and Beto at Whataburger on Tuesday:

Joe Biden: “if I win,” Beto O'Rourke, who wants mandatory gun confiscation, will “change the face” of gun controlhttps://t.co/ErXT5Z2J5V pic.twitter.com/DIsBM1Cjkt

They want to take your guns

This isn't some right-wing conspiracy

This is the modern Democrat party

We can't let them take away our Second Amendment pic.twitter.com/gOdIWnUHZy

Joe Biden promises Beto O'Rourke, who pushed for gun confiscation for legal gun owners, will “be the one who leads" his gun control effort pic.twitter.com/qjgft8wFkt

Doocy to Psaki: ‘You Accused These Officers of ‘Brutal & Inappropriate Measures’…Will You Apologize?’