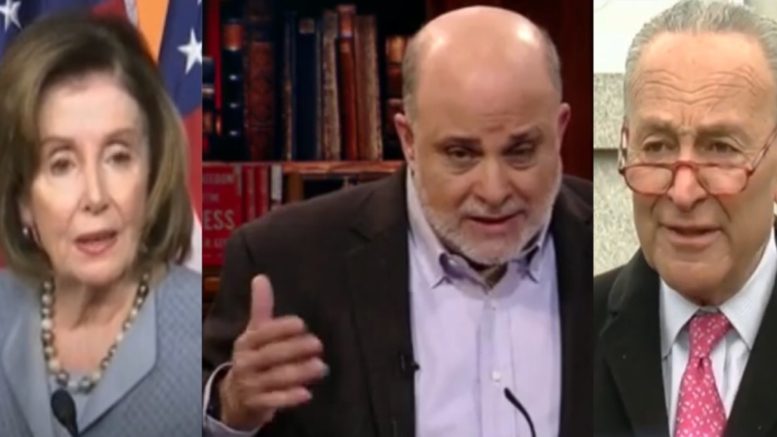 “I watch this and I realize there’s a lot of stupid people on TV, quite frankly,” Levin expressed. “The last people I want playing doctor with me or the American people would be Chuck Schumer and Nancy Pelosi.”

“They attack the president of the United States– not one negative word for the dictator of China, the way they’ve mishandled this entire thing. In fact, you’ve got [Mike] Bloomberg out there praising China. You’ve got Thomas Freidman with 100 Pulitzer prizes in The New York Times praising China. Are they praising China now?” Mark Levin wondered.

Levin proceeded to name off a series of actions taken by President Trump and his administration since the outbreak began.

“There’s been no CDC cuts. There have been [funding] increases; It’s time to get the facts out.” Levin explained. “Certain individuals have been quarantined by this president — the first time a president has done that in over half a century. The White House coronavirus task force was appointed over a month ago. The president temporarily suspended entry into the U.S. of foreign nationals that pose a risk of transmitting the coronavirus.”

“What have the Democrats done during this period of time?” he asked. “From January 16 to February 5, the United States Senate was paralyzed by the House Democrats and Chuck Schumer and Nancy Pelosi with this outrageous impeachment trial where the Senators had to sit on their hands and shut their mouths, couldn’t pass any business.” (Continued Below)

“They couldn’t pass a bill to increase funding. They say they want more funding, they couldn’t do it. … They couldn’t address the coronavirus, because Pelosi and Schumer shut down the Congress. They don’t want to talk about that, do they?” Levin asked. [Emphasis added].

He then shifted his focus to the 2020 presidential candidates wondering what their plan entails.

“The Democrats, they go to the microphone and they attack, not just the president but the professionals–the CDC, the NIH, the HHS. They don’t know anything,” he suggested. “What is their plan? What is the Schumer-Pelosi, [Bernie] Sanders, [Joe] Biden, [Pete] Buttigieg, [Amy] Klobuchar- whatever… What are their plans?” (Video Below)

“[Democrats] have great plans for containment: Open borders, eliminate ICE, no vetting of foreigners, sanctuary cities, nationalize and destroy the greatest healthcare system on the face of the earth, destroy our pharmaceutical companies … that will come up with the solutions?” Levin said

“The answers won’t come from the liberals and the Democrats,” Levin concluded, “which is why they attack.”

“2. What’s their containment plan?  What’s their vaccination development plan? Meanwhile, all they know is to attack, blame, and politicize. Like their media propagandists,” he wrote.

2. What’s their containment plan?  What’s their vaccination development plan?  Meanwhile, all they know is to attack, blame, and politicize.  Like their media propagandists.

Related: Mark Levin: “The Next Democrat President Of The United States Must Be Impeached”)