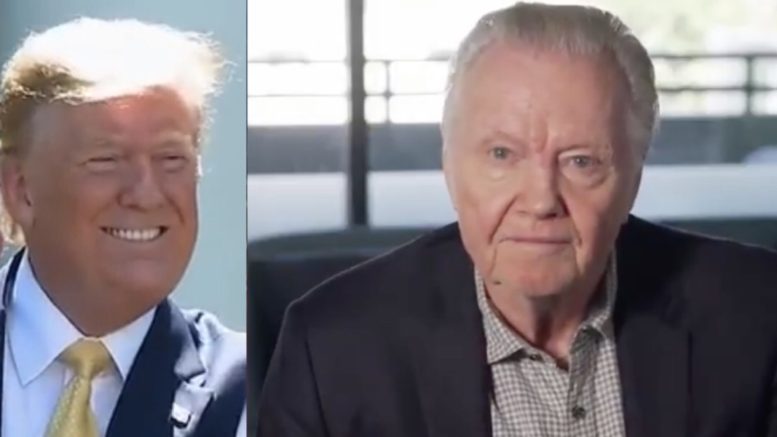 Actor Jon Voight took to Twitter Monday with a video message for America pertaining to President Trump and the 2020 presidential election in November.

“We will win 2020!” Voight expressed. “There is no better man to take this country to it’s highest call of God. There is only one man, this is our President of the United States of America, Donald Trump.”

Jon Voight explained that these “last four years have proven victory”, with Donald Trump as President, adding that the “next four will prove even more greatness upon our country.”

“President Trump has a mightly love for our people and our country,” he continued. “No man will take this to the heights he has.”

“I want all of you, my fellow Americans, to take this pledge with me. Let us all vote for our president to win this battle. And with this win, he and the Almighty will make America great once again,” Voight urged.

“I stand will all of you, and for the love of our country and with the power of God, may he give strength to all so they can follow the truths, see the truth, and vote for the only truth, President Trump. God bless,” Jon Voight said. (Video Below)

At the beginning of the month, Jon Voight ripped House Speaker Nancy Pelosi (D-CA) in another video on Twitter, calling the House Speaker and her “cohorts” a “threat to America”.

“[Pelosi] has a length that is corrupt, her soul has evil intent. We will stand in the name of God, we will stand with President Trump, for he is the greatest President,” Voight proclaimed.

“He has done what God has asked for: to protect this country with open arms of love and protection for a nation that is being targeted against by some of its own, along with enemies across the world. The left radicals are trying … to bring down the United States of America with lies and barbaric behavior. This is not what God wants of his children,” he expressed. (Video Below)

The Glory Of A Nation pic.twitter.com/IvvyQV2AVL

“So my fellow Americans, let us stand in her glory, the glory of a nation that has been restored with the greatest President, Donald Trump,” Voight declared.

“And we the people of the Republican Party gift our knowledge to the ignorant, that they may open the door for truth. And if they can’t see this, let us continue our fight to keep our President of the United States of America in office. Because he is the greatest president since Abraham Lincoln. God Bless the USA,” he concluded.

(Related: Jon Voight Issues A Message To Both Those Who Love & Hate Trump: ‘Let Us Take A Stand For Liberty & Justice For All’)

Rep. Finchem Issues a Statement After Filing Preliminary Injunction Against Use of Electronic Voting Machines in Arizona