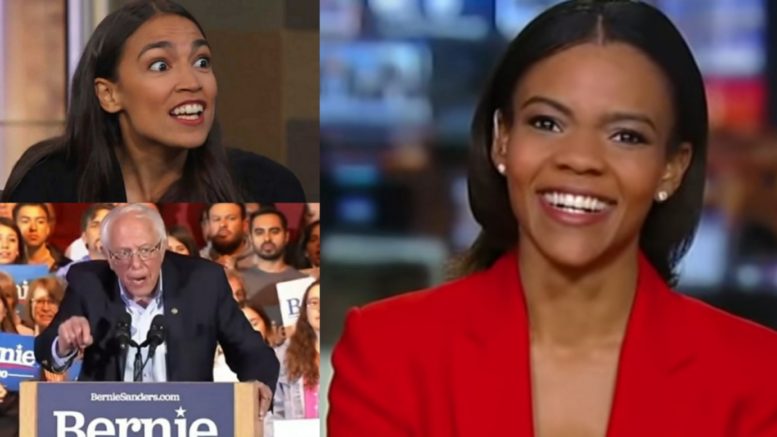 On Sunday, Candace Owens voiced her appreciation for self-proclaimed Democratic-Socialists, like Bernie Sanders and Alexandria Ocasio-Cortez, for their open far-left ideology, which she thinks will ultimately help Republicans in the 2020 election and beyond.

Owens made the assessment near the end of her interview with Maria Bartiromo of Fox News.

Related Article: Chelsea Clinton Says ‘This Is Not The Country I Want My Kids To Grow Up In’, Candace Reacts: ‘Fraud’

Maria asked Candace how she would “assess” what is happening with Bernie Sanders now that he is the clear front-runner in the Democrat primaries.

Mrs. Owens responded by saying that she is not surprised by Bernie’s success, and she then turned  focus on his Democratic-Socialist counterpart Alexandria Ocasio-Cortez.

“I appreciate people like Alexandria Ocasio-Cortez,” Candace said. “People can hate her, but thank goodness for her, right? She’s the Jeremy Corbin of America — somebody who is willing to boldly, outright say what they are after.” Video Below

“But, [AOC] so boldly…saying that they want these lunatic policies. Bernie Sanders is so boldly in the front saying, ‘Here’s what we’re gonna do. You’re not gonna have your private health care. We’re gonna socialize healthcare.’ It is thanks to that, the Democrat party is now effectively splintered. There’s no way forward because the party is splintered,” she declared.

Then after giving examples to back up her claim, Owens concluded, “Their party is literally broken at this moment in time and it is the most fascinating moment to be paying attention to the Democrat party. I can not look away. It is primetime television every single time. I can not wait for Super Tuesday. I’m looking forward to it like the night before Christmas.” Video Below