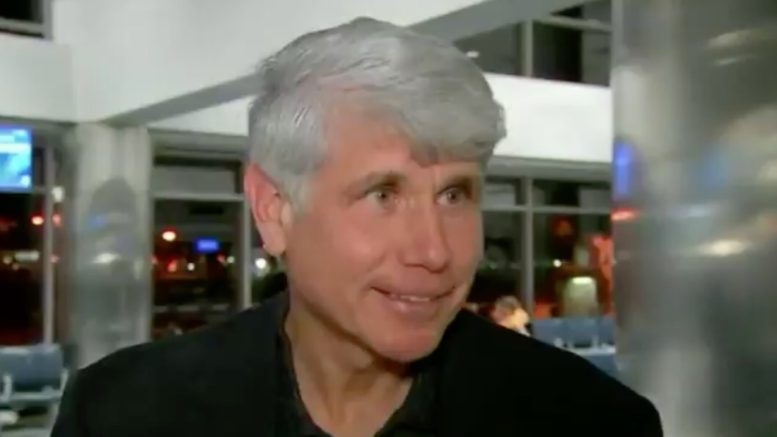 Tuesday evening, following his release from a Colorado federal prison and before boarding a plane in Denver, former Democratic Illinois Gov. Rod Blagojevich spoke with reporters expressing his gratitude to President Donald Trump for granting him clemency.

“President Trump is the one who did this, and I’m profoundly grateful,” Blagojevich told reporters at Denver International Airport.

“He’s got obviously a big fan in me,” said Rod Blagojevich of President Trump.

“He didn’t have to do this. He’s a Republican president; I was a Democratic governor,” Blagojevich said. “My fellow Democrats have not been very kind to him. … In fact, they’ve been very unkind to him.”

Blagojevich was impeached and removed from office in 2009 on corruption charges and was sentenced in 2011 to 14 years in federal prison. He had served eight years. The corruption charges were related to his solicitation of bribes in an attempt to “sell” the Senate seat Barack Obama left open after he was elected president, reported NBC News. (Continued Below)

President Trump has said he believed Blagojevich was treated unfairly when a federal judge in Chicago sentenced him to 14 years in federal prison. “He’ll be able to go back home with his family,” the president said Tuesday. “That was a tremendously powerful, ridiculous sentence in my opinion.”

On Wednesday, Rod Blagojevich held a news conference and expressed his gratitude to the president for commuting his sentence, calling him “kind,” “smart” and “courageous.” He said his daughters always will consider the commutation the greatest gift they’ve ever received.

“President Trump is tough and outspoken, but he also has a kind heart. This is an act of kindness. …We want to thank our deepest gratitude to President Trump. … As a Republican president and a Democratic governor, he didn’t have to do this. But President Trump is not a typical politician,” he said. (Continued Below)

“He’s tough, he’s outspoken, he gets things done. He’s a problem solver and in a business where too many politicians don’t want to solve problems. All they want to do is play politics and get nothing done for the people,” he continued.

“I’m a Trumpocrat!” Blagojevich reiterated, telling reporters on Wednesday. “If I have the availability to vote, I’m gonna for [Trump]”.

President Trump took to Twitter on Wednesday to quote Fox News‘ Lisa Booth: “Rod Blagojevich did not sell the Senate seat. He served 8 years in prison, with many remaining. He paid a big price. Another Comey and gang deal! Thank you to @LisaMarieBoothe who really ‘gets’ what’s going on! @FoxNews”. (Video Below)

Rod Blagojevich: "He's [Pres. Trump] got a obviously a big fan in me. If you're asking what my party affiliation is… I'm a Trumpocrat." pic.twitter.com/ztVuNuCQYq