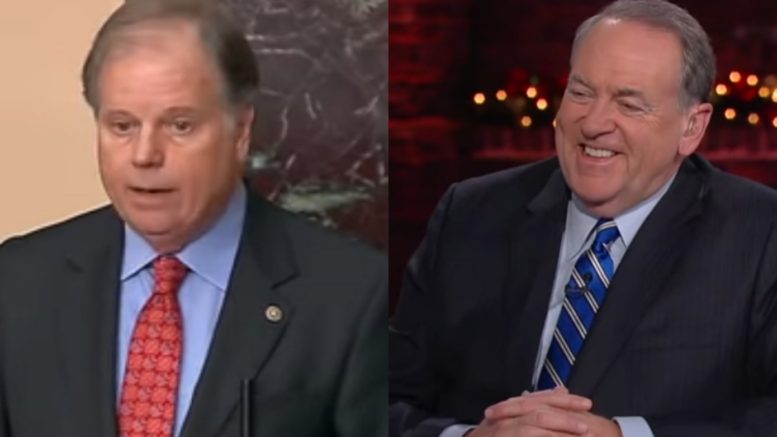 Jones, whose U.S. Senate seat is up for grabs in the deep red state of Alabama this year, said in a statement that he “reluctantly” decided to vote to convict the President on both articles of impeachment “after many sleepless nights.”

“After many sleepless nights, I have reluctantly concluded that the evidence is sufficient to convict the President for both abuse of power and obstruction of Congress,” Senator Jones said in a statement addressing his decision.

“The President’s actions placed his personal interests well above the national interests and threatened the security of the United States, our allies in Europe, and our ally Ukraine,” he continued. “His actions were more than simply inappropriate. They were an abuse of power.”

In response to Jones’s statement, Mike Huckabee tweeted: “Memo to Doug Jones of AL: You said you’ve had sleepless nights over impeachment verdict. Good news! After Nov, you’ll be able to sleep late every day. You’ll be back in AL.”

“Hope you enjoyed your brief time in the Senate. If you need some boxes to pack your stuff, let us know,” Huckabee added. See Below

Memo to Doug Jones of AL: You said you've had sleepless nights over impeachment verdict. Good news! After Nov, you'll be able to sleep late every day. You'll be back in AL. Hope you enjoyed your brief time in the Senate. If you need some boxes to pack your stuff, let us know.

Moments later, Huckabee targeted Mitt Romney with a pair of tweets over his decision to side with Democrats by voting to convict President Trump on Article I, and exposed one of Romney’s advisors who allegedly worked with Hunter Biden on the board of Ukrainian oil company Burisma.

Mitt buys the load of Schiff. He's still upset he choked against Obama & begged for Sec of State but was passed over by @realDonaldTrump (thank goodness!). He makes a fine Democrat Senator for Utah. I sure miss @OrrinHatch who was a statesman. Utah deserves better. We all do.

Well this may explain a lot! Maybe there ought to be an investigation. Will Mitt’s conscience force him to ask for it? Top Romney Adviser Worked With Hunter Biden On Board Of Ukrainian Energy Company https://t.co/nCkxF5hszC

Finally, the former Arkansas governor capped off his tweet storm by warning American voters not to “let their votes stolen by these goons.”
https://twitter.com/GovMikeHuckabee/status/1225173742902485000?s=19

In ending, here is video of Senate Majority Leader Mitch McConnell weighing in on impeachment fallout:

Jason Chaffetz: “McConnell Should Step Down As The Minority Leader & They Oughta Put In Tim Scott There”