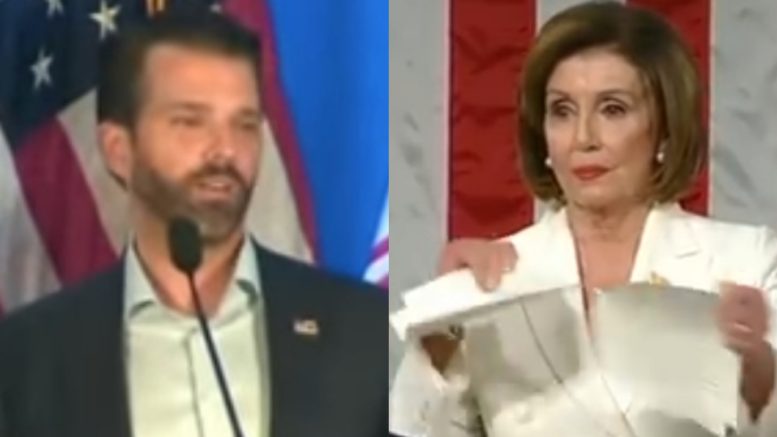 House Speaker Nancy Pelosi ripped up President Trump’s speech Tuesday night, as he ended his State of the Union address in the chamber of the US House of Representatives at the US Capitol Building in Washington D.C.

NBC News’ Frank Thorp reported that Pelosi told reporters she ripped up the speech because “it was the courteous thing to do, considering the alternative.”

Donald Trump Jr., however, called Pelosi’s move “shameful” and tweeted a collage that signified the meaning behind what she really ripped up.

The collage featured a picture of Nancy Pelosi in the middle ripping up the President’s speech. She is then surrounded by special guests who were invited to the State of The Union and “represent the very best of America.”

Trump Jr. captioned it: “This is what Nancy Pelosi ripped up. A truly shameful move, even for her.” See Below

This is what Nancy Pelosi ripped up. A truly shameful move, even for her. pic.twitter.com/I7mNMZn4sj

Trump Jr. followed up by trolling Pelosi with another tweet, where he said his father will get the last laugh after he’s acquitted in the impeachment trial later on Wednesday.

In ending, here is Mike Pence’s reaction to Pelosi ripping up the President’s speech:

WH Comms Director Denies The Immigration Surge is Different Than Prior Years: “It Is The Same”