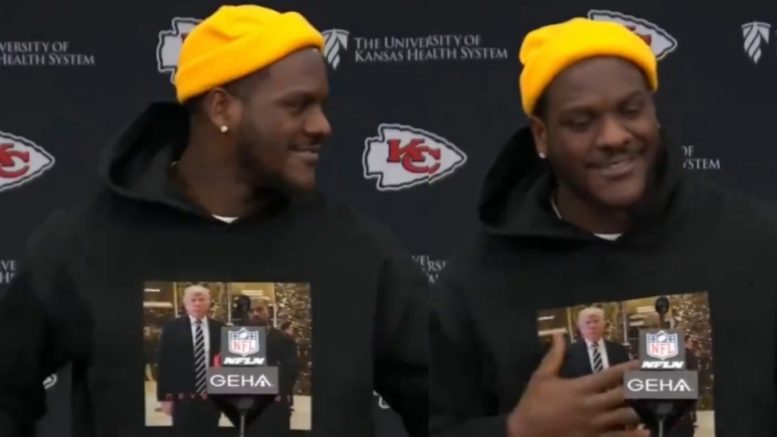 And the media, of course, couldn’t refrain from asking the star defensive end about his choice of clothing.

Related Article: In His Debut Back To Social Media, Kanye Drops A MAGA MOAB On All Of His Fans: ‘I’m Performing With My [Bleep]-ing Hat!’

One reporter asked, “So, can you explain the shirt?”

“Oh, the hoodie?” Clark responded with a big smile on his face, and recalled getting it from one of his good friends.

“And I’ll never forget, man. Ya’ll know the moment when Donald Trump met Kanye, ya know — a historical moment in our history,” he said with a grin as the media laughed. Video Below

Here is video of the “historical moment” when Kanye West met President Trump as featured on Frank Clark’s hoodie:

Nancy Pelosi Calls President Trump An “Imposter,” Jim Jordan Reacts: “Democrats Have Been Trying To Get Him Since The Start Of Congress”