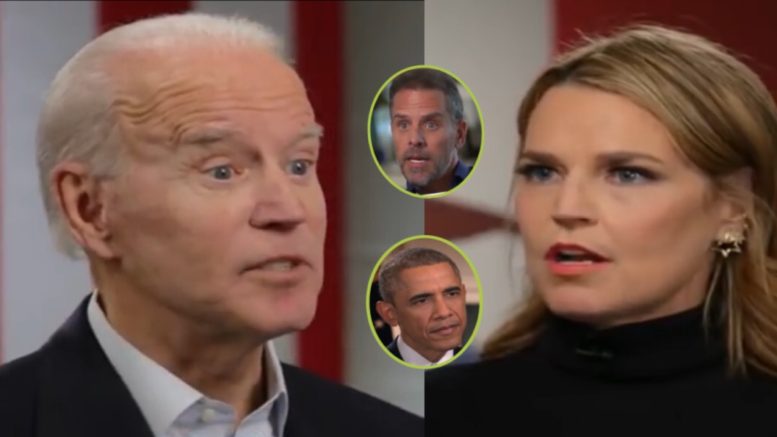 In a  Monday interview on NBC’s “Today”, former Vice President Joe Biden snapped at anchor Savannah Guthrie telling her she “doesn’t know what she’s talking about” when pressed about his son Hunter Biden’s dealings with Ukraine.

Biden further claimed he’s only one among the Democratic candidates with “broad support”, and nominating him “is a third term for Barack Obama”.

Savannah Guthrie told Joe Biden that presidential candidate Bernie Sanders “has an overwhelming majority of the young vote” who are under 50, and endorsed by “the squad”. Biden argued that he “didn’t believe that”, but said Sanders has a “significant number of voters between the ages of 18-30.”

“I think I’m the only one who has broad support with brown, black, young, old, women, men, working-class folks. So, I buy into that,” Biden claimed.

When asked what is his argument to young voters who think Joe Biden represents a different kind of politics that has been done before, “an old playbook”, Guthrie noted, the former vice president replied, “This is a third term for Barack Obama. Would he say it’s a risky choice? … I see it as moving on from what we started.” [Emphasis added].

“One of the reason’s I’m running is because of my experience. Who’s gonna be ready on day one to pick up the phone and call any world leader? And they know who he is, and he knows who they are,” Biden said. (Continued Below)

“Do you agree it sets a bad image?” Guthrie asked Biden, to which he responded, “My son said that.”

“Do you think it was wrong for him to take that position knowing that it was really because that company wanted access to you?” she asked, which set off Biden, and he snapped back: “That’s not true. You’re saying things you do not know what you’re talking about. No one said that. Who said that?” he vented. [Emphasis added]. (Video Below)

“Don’t you think it’s just one of those things where people think, ‘Well, that seems kind of sleazy. Why would he have that job, if not for who his father was?'” Guthrie inquired.

“He’s a very bright guy,” Biden claimed. “He said he regretted having done it. Speak for himself. He’s a grown man.”

(Related: Biden To Girl At NH Rally: “How Old Are You, Honey? Eleven Years Old. Talk To Me Before We Leave, OK?”)