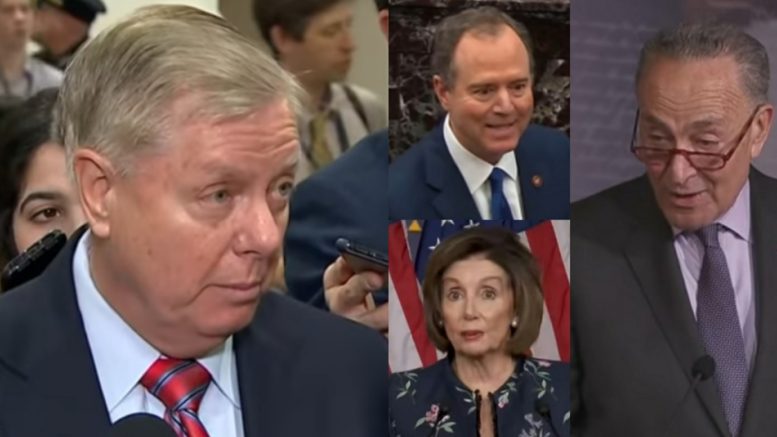 As the Senate is set to vote on whether to hear from witnesses in the impeachment trial, Senator Lindsey Graham turned the tables on those who are suggesting GOP Senators are “Blocking Witnesses.”

Multiple media sources and Democrat leaders have accused GOP Senators of trying to block witness testimony as it’s been reported that they have enough votes to prevent that phase of the Senate trial.

House Speaker Nancy Pelosi and impeachment manager Adam Schiff have even gone as far as saying that President Trump would not technically be aquitted if witnesses are not heard from in the trial. While Senator Schumer suggested GOP Senators are “afraid” to call witnesses forward.

Senator Graham slammed the “insane” claims being made, and said it is House Democrats fault they didn’t pursue to hear from all of the witnesses they desired before sending two articles of impeachment to the Senate.

Sen. Graham tweeted, “Of all the insane things being said about this impeachment debacle – and there is a lot to choose from – one of the most ridiculous is to say Senate Republicans are ‘Blocking Witnesses.'”

He added, “This is an outrageous claim.” Continued Below

Related Article: Chris Wallace & Katie Pavlich Spar Over Whether The Senate Should Call Witnesses: “Get Your Facts Straight!”

“FACT: It was the House of Representatives who refused to pursue the testimony of the witnesses because they wanted to impeach the President before Christmas,” Graham continued. “Only in Washington would someone call that decision “Blocking Witnesses.”

“In most of America it’s called: #YourOwnFault,” he concluded. See Below

Of all the insane things being said about this impeachment debacle – and there is a lot to choose from – one of the most ridiculous is to say Senate Republicans are “Blocking Witnesses.”

This is an outrageous claim.

In most of America it’s called: #YourOwnFault.

In ending, here is video of Senator Graham nreaking down the latest temper tantrums coming from Democrats as the impeachment trial is wrapping up:

Bernie Calls Trump A ‘Coward’ For Wanting Voter ID, Crenshaw Fires Back: It ‘Defies Logic’ To Not Want Voter ID