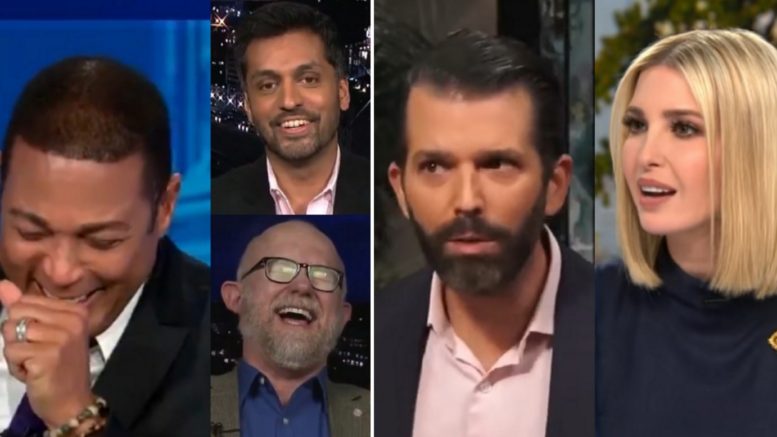 Donald Trump Jr. and Ivanka Trump lashed out at CNN’s Don Lemon and his Saturday night panel over their hit-piece that targeted the President and his supporters.

It all began when the panelists were discussing Secretary of State Mike Pompeo’s challenge for a reporter to point out Ukraine on a map.

Lemon began cracking up laughing after Wilson said, “[Pompeo] also knows deep within his heart that Donald Trump couldn’t find Ukraine on a map if you had the letter U and a picture of an actual physical crane next to it. He knows that this is, you know, an administration defined by ignorance of the world. And so that’s partly him playing to the base and playing to their audience. You know, the credulous boomer rube demo that backs Donald Trump.”

Then after switching to a southern accent Wilson said, “‘Donald Trump’s the smart one — and y’all elitists are dumb!'” And Ali jokingly replied, “‘You elitists with your geography and your maps- and your spelling!'”

Unlike Don Lemon who nearly fell out of his seat from laughing, Trump Jr. and Ivanka did not find the segment funny at all, and slammed CNN’s “media hacks” over their “smug ridicule.” See Below

“You consistently make fun of half the country and then complain that it is divided,” Ivanka said in her response to Lemon’s segment. “The arrogance, mocking accents and smug ridicule of this nation’s ‘Real Elites’ is disgusting.”

Trump Jr. tweeted, “These media hacks don’t just hate the President, they hate the Americans who support him. No wonder their ratings are so low, they find it funny to mock regular, everyday Americans.”

“November is coming, & those Americans will once again have the last laugh,” he declared. See Below

These media hacks don’t just hate the President, they hate the Americans who support him. No wonder their ratings are so low, they find it funny to mock regular, everyday Americans.

November is coming, & those Americans will once again have the last laugh pic.twitter.com/HwXDO0KpZF

In ending, here is President Trump’s reaction to the mockery:

Stelter Warns ‘Don’t Be Fooled By Propagandists’ Over Trump/Iran Coverage, Huckabee Fires Back: “Their ‘News’ Is Delivered From The Bull’s Behind”

Hillary Clinton Announces She’ll Be Teaching Her ‘Skills’ in a MasterClass, Don Jr. Roasts Her: ‘She’s Probably Qualified to Teach One on…’