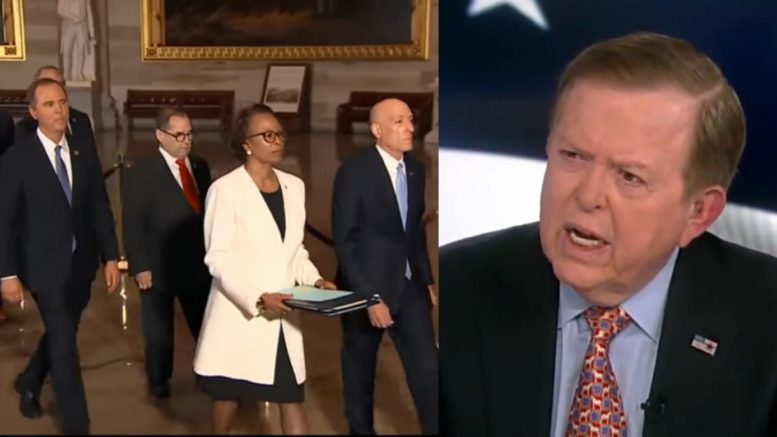 While interviewing Congressman Matt Gaetz, Fox host Lou Dobbs had quite the description for House Democrats, who he called “venal little lilliputians” in wake of their efforts to “otherthrow” President Trump from office.

Gaetz got done commending President Trump for signing phase one of a China trade deal on the same day that House Speaker Pelosi signed articles of impeachment, when Dobbs made the remarks.

“We will be stronger as a result of this (China trade deal),” Gaetz told Dobbs. “And the Democrats through this impeachment, they’re trying to make our country weaker.”

Dobbs followed up by asking Gaetz, “How do you walk around that chamber with these people who are so hateful, And, so obviously willing to live in a cesspool of deceit in their conference, and trying to bring down a man?”

“They look — they are venal little lilliputians working at his heels,” he declared.

“It’s just, to me, insane that the national left-wing media continues to tolerate it without comment — what they know is, frankly…pure hate in a effort, unending it seems, to overthrow this President,” Dobbs said.

Moments later, he proclaimed, “It’s extraordinary the little time is given to what this President and his Administration is accomplishing for the American people.” Video Below