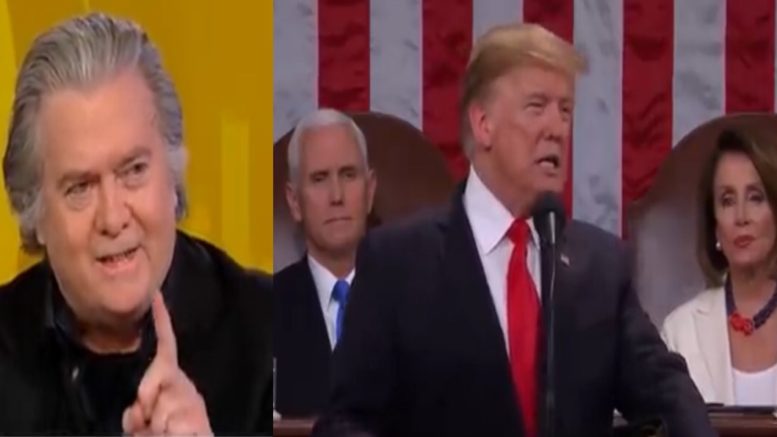 Nancy Pelosi (D-CA) invited President Donald Trump, in a letter, to deliver his State of the Union address on February 4, 2020, in the Chamber of the U.S. House of Representatives, the same week that the Democratic-led House voted to impeach the president. The Commander in Chief reportedly accepted the invite.

Former White House advisor Steve Bannon, however, is calling on the president to delay the State of the Union until after the impeachment trial in the Senate.

During an interview on Fox News’ “Sunday Morning Futures”, Steve Bannon told host Maria Bartiromo that President Trump should push back the State of the Union until after he is acquitted so that there is no hovering “uncertainty” regarding impeachment.

Bannon said that Pelosi slow-walked the articles of impeachment for two reasons: to find more evidence because “they didn’t have it and were afraid the guns would be turned back on them for a weak case” and to make sure she could “bigfoot President Trump’s State of the Union message,” adding that, “President Trump understands that the jury is the American people, the audience is the world. The world is watching this.”

“She invited him to the State of the Union and then she purposely slow-walked this, because she wants it in the middle of the trial– and I could see The New York Times headline: ‘Under a cloud of uncertainty, Trump addresses the nation'”, he explained. (Continued Below)

“He has to be acquitted. He will be acquitted and exonerated,” Bannon continued. “That should happen. And then, he should do the State of the Union because the whole world will watch this.”

“President Trump’s got a great saying, ‘No games,’” he added. “This is all game playing by the Democrats. That’s got to be brought to an end.”

Leo Terrell On Joe Biden: “Let This Man Stand Up on His Own Two Feet, Put on the Big Boy Pants”